Facebook’s indifference is putting us all at risk.

For many Facebook users, the news in October that the company had changed its advertising policies to allow politicians and political parties to blatantly lie in their advertisements was the last straw.

Facebook users’ concerns with the company’s policies started long before October. They include the fact that the company failed to prevent Russian disinformation from being widely spread on its platform during the 2016 election and that Russian targeting of African-American voters may have suppressed African American turnout. Incitement of violence and human rights violations are also of concern. The call to action for the Save Our Democracy: Protest Facebook event states, “In Myanmar and India, Facebook’s failure to recognize its role in facilitating the incitement of hate-fueled violence has meant life and death. In the United States, its callous disregard for its role in facilitating the breakdown of our democratic beliefs, norms, and values is threatening the fabric of our society.”

Facebook has become a net negative for our society, putting profits before public good at every turn.

Now we’re coming together to put a stop to it.

Facebook must immediately prevent its platform from being used to spread disinformation and divisiveness that could disrupt our elections. We’re urging Facebook to:

Stop the lies in political ads

Right now political campaigns can target their ads so precisely that they can pinpoint them to reach specific voters. The problem with this, according to former Federal Election Commission Chair Ellen Weintraub, is that “false and misleading messages may be disseminated in a way that does not allow people with conflicting information to counter those messages, because they won’t see them.” Facebook already restricts targeting for industries with a history of discrimination, like housing. They should do the same with political ads.

Refuse service to anyone trying to disrupt the 2020 election

All businesses can refuse service to a person who violates their policies. Restaurants usually require patrons to .wear shoes and shirts. Facebook should require that users refrain from using the platform to disrupt the 2020 election. They can do this by implementing terms of service or acceptable usage policies that require users to follow certain rules about how Facebook can be used.

There’s no dearth of ideas for how to reform Facebook to protect our democracy and our civil society. Facebook’s own employees have put forward an excellent set of recommendations that include spending caps for politicians and observing silence periods free from political advertisements before elections. Another strong set of recommendations was put forward by Change the Terms, which focuses on how the platform can enforce an acceptable use policy to prevent Facebook from being used to incite hate, fear and abusive behavior. Finally, a number of organizations make the case that the Federal Trade Commission should break up Facebook, which now has unprecedented power to decide what news and information billions of people around the world see every day. 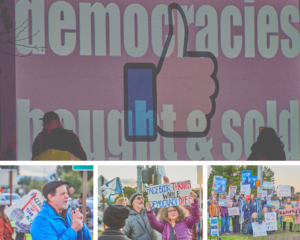 On January 9th we held an in-person protest in front of Facebook’s corporate headquarters in Menlo Park, California*. The event was covered by CNBC, ABC7, KQED, OAN (One American News Network) and more. We published an Op Ed in the San Francisco Examiner: Want fair elections? Help us protest Facebook, by Ted Lewis of Global Exchange and Tracy Rosenberg of Media Alliance.

And we called on people all over the country to join the  #FacebookBlackout — by replacing their profile picture and cover photo with a blackout Facebook box. 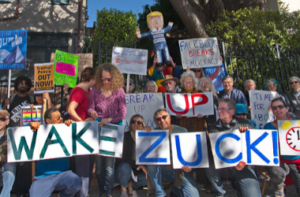 On President’s day, we gathered together and sent the message loud and clear: Facebook can’t mess with our democracy, spread hate and get away with it.

Our Wake the Zuck Up action was covered by media outlets including Newsweek, SF Examiner, CNET, SFIST, Mission Local, SFGATE, KCBS Radio, and even Breitbart news.

*These events were organized in collaboration with our partners at the Media Alliance, and endorsed by MediaJustice, CODEPINK, CREDO Action, Indivisible SF Peninsula/CA-14, Indivisible Healdsburg, FacebookBlackout2020.com, Free Press Action, SumOfUs, Vigil for Democracy, Coastside United for Action, and RYSE.