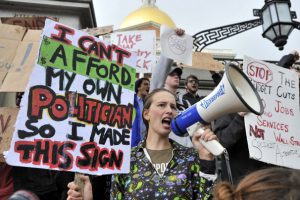 Citizen power, expressed through democratic institutions, is a prerequisite for social, economic, and environmental justice.

This vision, a global democracy, has guided Global Exchange’s work to support peace, justice, and sustainability here at home and around the world. Our commitment to true democracy, where people are fully and fairly represented in their political process, has remained central to our work throughout our nearly 30-year history.

Global Exchange has supported democracy by working for accountability in trade, fair elections (both U.S. and international), and by addressing the toxic effect of money in politics. 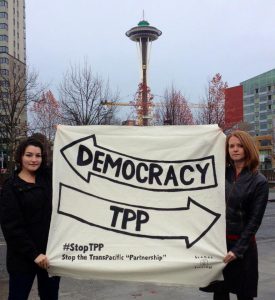 Unelected, unaccountable institutions such as the WTO and IMF should not be writing the rules, especially when their version of international development requires such harmful conditions for workers and our environment.

Corporate globalization remains the top threat to global democracy. We believe that true democracies can empower people to say no to the forms of trade and corporate practices that harm their country, their workers, their environment, and their future. We are unwavering in our commitment to ensuring people not corporations have the power to determine economic, social and environmental policies.

Countries that undergo elections  as a step in transitioning out of dictatorships and/or corrupt regimes have a number of challenges. Over the years, pro-democracy groups have invited Global Exchange as an ally organization  to observe elections taking place in their countries. Over the years we have observed elections in 16 countries on four continents, including South Africa’s unprecedented 1994 post-apartheid election, Mexico (1994-2006), Indonesia (1997), Haiti (2000), East Timor (2004), and Colombia (2010).

We were honored  to stand in support of people around the world as they underwent a profound democratic transition.  And following the controversial Bush v Gore election of 2000, Global Exchange invited an international delegation  of election officials from around the world to observe the U.S. election in 2004.

In the post-Citizens United v. FEC world, corporate lobbying and unlimited campaign contributions have further empowered corporate influence on our democracy here in the U.S.  Billions are spent yearly by Wall Street, Big Oil, and War Profiteers to have their views heard by elected officials, their drafts of legislation signed into law, and their coffers filled with our  tax dollars. 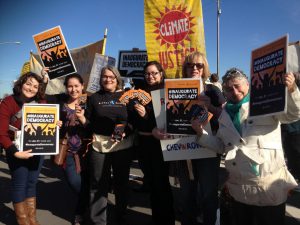 Global Exchange’s Elect Democracy campaign worked to confront greedy corporations and their lobbyists directly, as well as hold elected officials accountable to represent us, the people. Our 2012 legislative scorecard tracked Wall Street campaign contributions and ‘Congressional loyalty rates’ based upon how often members of the Senate and House voted in line with Wall Street’s lobby position on key bills including the bailout, Dodd-Frank Wall Street reforms, and free trade deals with Colombia, Panama, and South Korea. Our “How Wall Street is Burning Democracy” report and workshops served to empower people to say no to the corrosive, toxic impact of money in politics, and to stand up to reclaim and protect democracy in the U.S.

Keeping the Vision for Global Democracy

Though corporate globalization continues to wreak havoc on planet and people, another form of globalization is unfolding simultaneously. This people’s globalization is using a growing array of tools that bring us together to gather wisdom, share solidarity, and build the connections that lead us ever closer to global democracy.

While we all contribute in ways large and small, there is something we all can do to bring about Global Democracy, wherever you are. One of the most persistent obstacles to democracy is oppression (racism, classism, sexism, homophobia, etc.). The primary function of these social ills is to fragment and suppress the political and social equality required for any top-functioning democracy.

Whoever and wherever you are, you can always take action to: stand up for respect, challenge hate, and honor the blessings of diversity on our shared planet.

As our intertwined movements  for peace and justice grow and adapt, it is through expanding our understandings, building borderless support systems, speaking with clear and consistent intention and taking meaningful action that we shall envision, create, and sustain global democracy. Thank you for being a part of it.

The struggles for global democracy continue today. Global Exchange is honored to stand with people’s movements here at home and around the world.