On 29th of May, Colombians went to the polls for the second time in three months. The first round has already created a unique new paradigm for Colombia’s party system and the second round which promises to be a photo finish is coming up on the 19th of June. This is why it’s important.

Fifty-five percent of those eligible to vote participated in the first round – 10 % more proportionately than during the first round four years ago – and roundly rejected the traditional parties that have governed Colombia to date. Between them, the first and second placed candidates, Gustavo Petro of the center-left Historical Pact and Rodolfo Hernandez of the populist Anti-Corruption League, polled 68.5%. Combined with the votes registered by fourth placed candidate, Sergio Fajardo, who represents the centrist Coalition for Hope, candidates offering Colombians a clean break from traditional politics won just under 73% of the total votes cast. This represents a seismic shift in political allegiance and promises to bring about a complete reconfiguration of Colombia’s traditional political parties going forward.

Much less clear is what kind of change Colombians will choose during the second round, scheduled in three weeks’ time on the 19th of June. Although Gustavo Petro doubled his vote with respect to 2018 and was last night’s clear winner with a 12% lead, political analysts agree that he has come perilously close to reaching his electoral ceiling. Rodolfo Hernández, on the other hand, has achieved enormous political momentum over the last fortnight. Billing himself as a successful businessman and political outsider committed to tackling corruption, Hernández is likely to take the lions’ share of the remaining votes as traditional parties rally behind him in order to block Colombia’s first center-left presidency.

Last night’s biggest loser was ex-president Alvaro Uribe’s favorite, Federico Gutierrez. The center-right candidate for the Team for Colombia coalition polled only 24%, well behind Rodolfo Hernández. He was projected to run off against Gustavo Petro in the second round as the candidate best placed to continue Alvaro Uribe’s right-wing politics that have dominated Colombia so much over the last 20 years. Federico Gutierrez has already pledged his political support to Rodolfo Hernández. Fourth placed Sergio Fajardo is predicted to do the same.

This leaves the outcome of the second round wide-open with a probable photo-finish for the winning candidate. The winner has less than three weeks to persuade the greatest number of undecided voters that their brand of change is the one that Colombians most need, although this will require reaching out to traditional parties in order to cross the 50% finish line. Rodolfo Hernández, the self-proclaimed “King of Tik Tok”, would appear to be the best placed to do so, given that his self-financed campaign strategy has been almost exclusively based on social media. This gives him the greatest leverage with undecided voters given that he can continue to appeal to them directly in the knowledge that he can take the support from the anti-Petro traditional parties for granted. Petro’s only hope is to reach out to middle-of-the-road absentee voters, Sergio Fajardo supporters and the leadership of the traditional centrist Liberal Party, but in the process could risk losing some of his credibility as the bastion of Colombia’s anti-establishment. 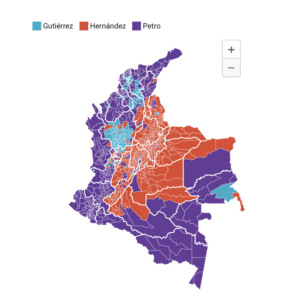 Something that has not changed and is unlikely to do so in the near future is Colombia’s deep geographical divide. The two-way split that so profoundly polarized the country during the 2016 peace agreement referendum has reappeared during these elections. Last night’s electoral map has an uncanny resemblance to the one produced six years ago when Colombia’s poorest periphery – composed of the regions most affected by over 50 years of armed conflict – voted overwhelmingly to approve the agreement. Colombia’s more peaceful and prosperous interior (with the notable exception of Bogotá) rejected the outcome of the Havana negotiations. This time Petro, who has pledged to fully implement the peace agreement, won throughout Colombia’s most conflict sensitive regions, whilst Rodolfo Hernandez, who has been completely silent on the issue during his campaign, dominated the country’s central core. The only exception to Hernandez’s dominance of the interior was in the department of Antioquia, the homeland and political epicenter of former president Alvaro Uribe, ferocious opponent of Gustavo Petro and the peace agreement.

Given Gustavo Petro’s decades-long presence in Colombian politics, Rodolfo Hernández can seek to seize the mantle of the outsider going into the second round, and in this way best reflect the current anti-establishment mood of the majority of Colombians. In the final three weeks, much will depend on the ability of both sides to reach out to the floating voters and convince them that their version of change is that which best reflects the future.