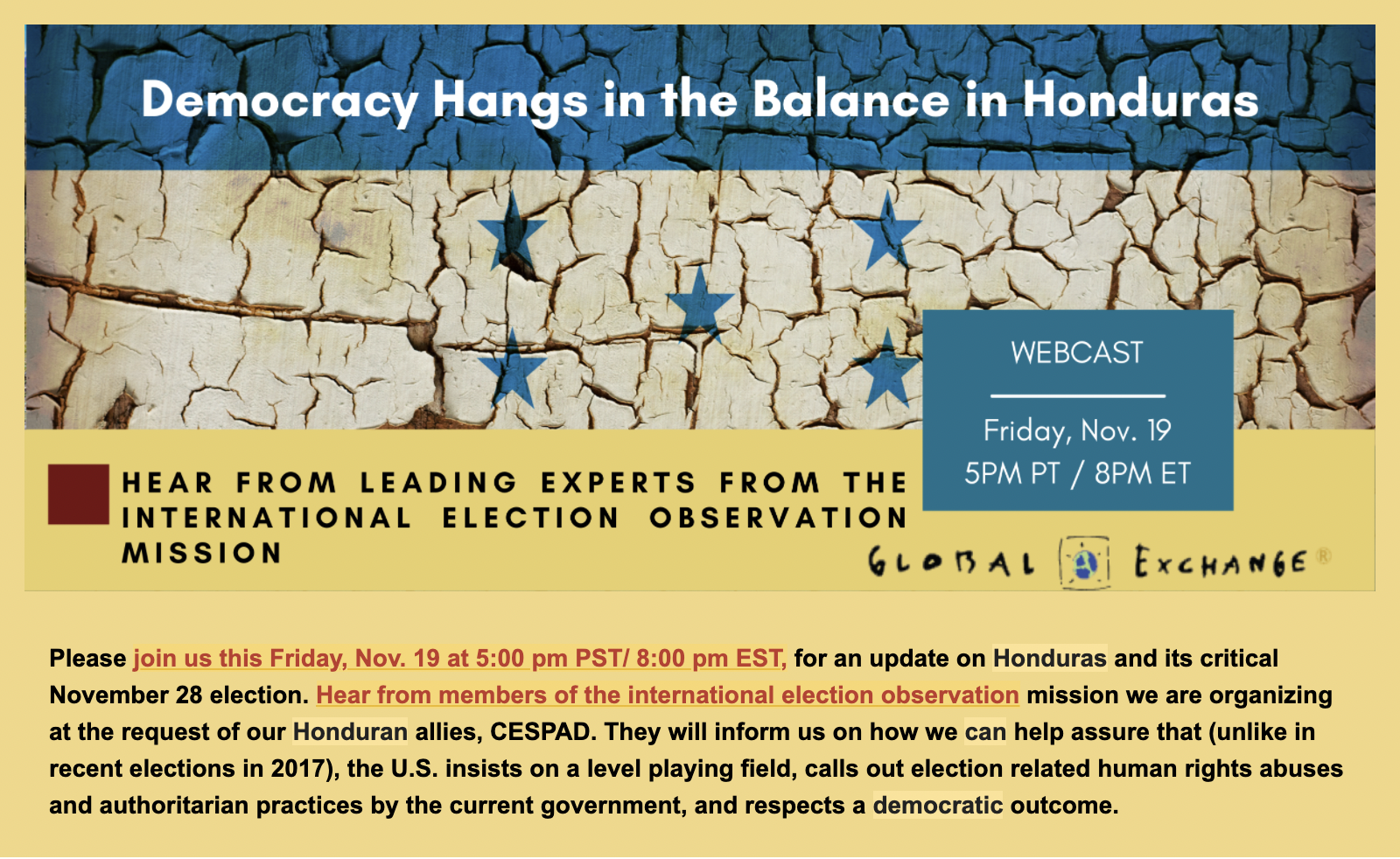 On November 28, the citizens of Honduras will vote for a new President, as well as all 128 representatives to their National Congress, 20 deputies to the Central American Parliament and many other local officials. These elections come 12 years after a military coup ousted the democratically elected president in Honduras.

They should represent an opportunity for a democratic clean sweep. “But it won’t be simple or easy,” says Gustavo Irias, the Honduran democracy advocate who founded CESPAD (the Center for the Study of Democracy).

With less than three weeks remaining before the country goes to vote, concerns are growing about the potential for fraud, restrictions on free speech and assembly, and potential violence.

To fight against electoral fraud, CESPAD is mobilizing Honduran youth and civic organizations to observe the upcoming elections and asked Global Exchange to help them organize an alliance of “independent international observers” to join Hondurans working to restore democracy and the rule of law in Honduras.

We invite you to join us next Friday, Nov 19th, at 5:00pm PST/ 8:00pm EST to meet members of the International Election Observation Mission, a delegation of over 250 Hondurans and 40 international observers coordinated by the Honduran organization CESPAD and Global Exchange.  You will hear from:

Carla Garcia is the International Relations Coordinator at OFRANEH, the Black Fraternal Organization of Honduras. OFRANEH  works to support the Garifuna community in the protection of their territories, and in its fight for social, economic, and cultural rights.

Karen Spring Karen Spring has lived and worked in Honduras since the 2009 coup. Formerly the Honduras-based Coordinator for the Honduras Solidarity Network (HSN), Karen is now doing a one-year collaboration with US and Canada-based organization, Rights Action. She’s the host of the Honduras Now podcast (hondurasnow.org, Twitter: @HondurasNow) and blogs at: aquiabajo.com.

Laura Carlsen, Director, (U.S.-Mexican) holds a B.A. in Social Thought and Institutions and a Masters in Latin American Studies, both from Stanford University. She has published hundreds of articles and chapters on social, economic and political aspects of Mexico.

This conversation will be moderated by Marco Castillo, Co-Executive Director and co-organizer of the upcoming International Election Observation Mission at Global Exchange.

Join us on Nov. 19 at 5:00pm PST/ 8:00pm EST to learn more about the situation on the ground in Honduras, the upcoming observation mission and ways you can get involved to ensure the U.S. supports a truly transparent, inclusive, and credible electoral process and democratic outcome for Honduras.