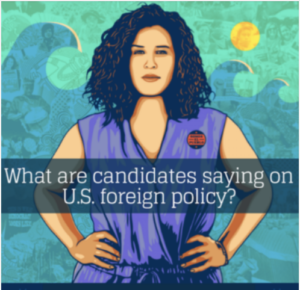 Last night’s 3 hour long Democratic debate between the “top twelve” candidates for President came three weeks into a constitutional clash of epic proportions. All twelve agreed on impeaching Trump and wanted to talk about it.

So it is not surprising that the CNN/NYT hosted forum had little detailed discussion of foreign policy beyond the consensus that Trump’s recent green-lighting of the Turkish military invasion of Kurdish zones along its border with Syria was dangerous and disreputable.

Those who hung in for the whole thing heard mentions of international trade by Cory Booker and Beto O’Rourke who opposed Trump’s “NAFTA” 2.0 for giveaways to big pharma and failure to prioritize worker protections. Elizabeth Warren (who pundits recently anointed as “front runner”) echoed similar sentiments on trade. So did Bernie Sanders. On this though, as on several issues, the sheer number of candidates and the short — and unequal — time allotted for answers made across-the-board comparison of their positions difficult.

For example, Andrew Yang broke a big drug war taboo by advocating decriminalization of opioids as part of a public health response to the addiction crisis that is devastating communities nationwide and killing thousands of Americans every month. Beto O’Rourke seconded Yang, saying that decriminalization will save lives and help those struggling with addiction, but the conversation stopped there. But it would have been fascinating to hear how the views of others –like former prosecutor Kamala Harris or Joe Biden whose son had just been on TV talking about his struggles with addiction — may have changed or evolved on this critically important issue that has long been considered a major “third rail” of American politics.

We want to make sure that future debates cover international issues in more depth.  It was not good enough that Cory Booker brings up the horrific war in Yemen breathlessly, at the end of a 40 second answer. We need to know what the candidates will do when traditional allies like Saudi Arabia, Turkey, and Israel violate human rights or how they will work with and handle current challenges with Iran, Russia, or Venezuela.

This debate, like many before it, left a great deal to be desired in terms of question framing and overall format. Our 2020 Global Vision campaign aims to apply pressure to candidates to answer the most important questions of our time. You can help.

Tweet, email, and be ready to ask them in-person when they come to rally in your state or your town. This kit has all the tools you’ll need to get involved and get candidates to answer where they stand on our top ten international and immigration policy questions.

The election is one year away. Let’s do everything we can to make sure the field of candidates reflects our shared values.

Together we will be heard.

Last night’s debate wasn’t great when it came to giving voters a good look at the candidates’ foreign policy positions. Let’s help them out by letting them know what kinds of questions we’d like them to answer.