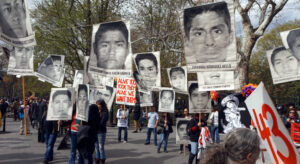 Tonight marks five years since police in Iguala, Guerrero in southern Mexico, armed with Colt assault rifles exported from the United States, attacked students from the Ayotzinapa teachers school, killing six people and forcibly disappearing 43 students. The students have yet to be found.

Documenting the Weapons Used “Because the police used weapons, my son disappeared 40 months ago,” Antonio Tizapa, the father of one of the 43 disappeared students, told weapons producers gathered in Washington last year. “He is my son. Please, don’t send more weapons to Mexico.”

Efforts to control U.S. exports of dangerous weapons such as those used against the Ayotzinapa students are at a key juncture . On this anniversary, take this chance to press U.S. Senate leaders to stop a move by President Trump that would make it much easier for companies like Colt to sell military-grade weapons to anyone without Congressional oversight.

In July, the House of Representatives approved an amendment to the National Defense Authorization Act (NDAA) that would stop the transfer of export licensing of assault weapons and other firearms from the State Department to the Commerce Department, whose mandate is to sell as much possible. Since the Senate did not include this measure in its version of the NDAA, the issue will now be decided in the coming days by House-Senate “conferees”.  Rhode Island Senator Jack Reed, the ranking Democrat on the Senate Armed Services Committee, is the most critical member of Congress in this process.

Unless the amendment is retained, then there is nothing to stop the transfer of gun exports to Commerce. This transfer would eliminate Congressional notification of proposed assault weapons sales to other countries, loosen the overall rules for firearms exports, and pave the way for the publication of 3D-printed weapons, which could be produced by anyone with a 3D printer, anywhere in the world.

That is why we are urging you to contact Senator Reed to support this amendment.

We don’t know when the 43 students will be brought home.

We know that today it’s important to put the brake on the U.S.-made weapons exported and used in their disappearance.

Please join us in that action.

Please take a moment to watch this video documenting the weapons used.