Last night’s debate: Not much new on Immigration and International Policy from Dems 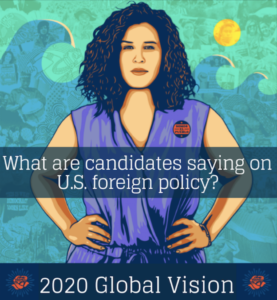 Last night’s Democratic debate in Houston, Texas gave viewers their first opportunity to see all the top contenders for the Democratic nomination on a single stage. There were lively exchanges and passionate views expressed on combating climate change, banning assault weapons, and most of all, defeating Donald Trump.

On immigration and international policy there was little new. Candidates certainly didn’t get around to giving detailed responses to the kinds of questions we have been raising about how they would uphold asylum, defend the human rights of children, hold ICE accountable for abuses, or address the root causes of migration. And the international policy questions we’ve prioritized – like bettering relations with Iran, ending support for the Saudi war in Yemen, reducing military spending, or backing Palestine rights – never really came up.

The U.S. war in Afghanistan did come up – and there was unanimity that the now 18-years of U.S. presence there should end. The consensus on withdrawal included Elizabeth Warren, Joe Biden, and Mayor Pete Buttigieg, who had deployed to Afghanistan with the Navy in 2014.

The topic of Venezuela was raised by Univision moderator Jorge Ramos who seemed to red-bait Bernie Sanders – chiding him for being unwilling to call President Nicolas Maduro a “dictator”, while asking the Vermont Senator to compare his “democratic socialism” to the Bolivarian kind in Venezuela. Sanders replied that Maduro was a “vicious tyrant” and that the comparison between Venezuela and his more Canadian or Nordic vision of socialism was unfair. Julian Castro seized the opportunity to call Maduro a dictator, signalling his support for regime change.

As we mentioned in a pre-debate email: Last week we sent ALL the declared candidates ten specific questions on foreign and domestic topics. We asked them to reply ASAP. We promised to post their answers, starting on Nov 3, 2019, exactly one-year prior to U.S. national elections.

Don’t you want to know — and don’t you think we all deserve to know — their answers?

Over the next month, we’ll need your help asking the candidates (over and over) to answer our ten questions on immigration and international policy. You can email, tweet or try to catch them at a candidate forum or campaign appearance.

We are working on a new tool designed to make contacting the campaigns more efficient for you and that you can share with your social media networks. We will send it as soon as it is ready.

Thanks for staying engaged. It will take great fortitude and the power of community to struggle against the anti-democratic forces our country faces.

We need to help each other stay in the fight for a better world this year.