America’s long fraught relationship with Iran has gotten more dangerous with Trump’s saber rattling and his revocation of the non-proliferation deal struck by the Obama Administration.

View this webinar for an in-depth report-back from their trip.  They will share stories heard and perspectives gained from their encounters with Iranians from all walks of life — including the Foreign Minister. Hear how hostile US policies like Trump’s travel ban and renewed economic sanctions are impacting ordinary Iranians. Stephen and Medea will also tell the story of the how the FBI “welcomed” them home. 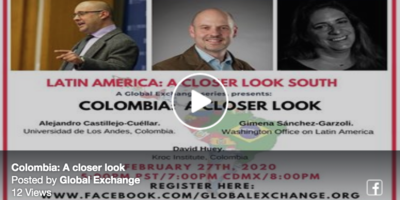 Webcast: Is Colombia Still on the Road to Peace?