After more than half a century of global drug prohibition, the evidence is very clear: the war on drugs has failed. Far from keeping our communities safe and healthy, it has been used to wage a war on the poor, on people of color, and, increasingly, on immigrants. 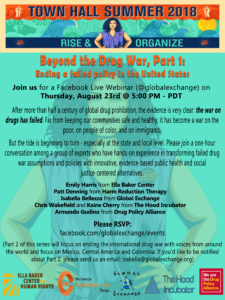 Please join us for a one-hour conversation livestreamed on Global Exchange’s Facebook this Thursday from 5 – 6pm PT. Meet a group of experts who have hands-on experience in transforming failed drug war policies with innovative, evidence-based public health and social justice-centered alternatives.

The past decade has seen encouraging developments, particularly at the state and local level. Recreational marijuana is now legal and regulated in nine states. Thirty states plus the District of Columbia allow for its medicinal use. Cities including Oakland, San Francisco, Sacramento and L.A. are implementing programs to increase racial equity in the marijuana industry. Twenty-two states have decriminalized or removed the threat of jail time for simple possession of small amounts of marijuana. And there is spreading bipartisan support for legalizing syringe access; rapid expansion of programs to reduce overdose fatalities; and growing law enforcement interest in harm reduction approaches to policing drug users and markets.

We must continue to turn the tide. More Americans remain behind bars for drug offenses than the number of all Americans incarcerated in the 1980s. Black and Latino people continue to make up a massively disproportionate number of this population, despite using and selling drugs at similar rates as white people. Accidental and preventable drug overdoses continue to kill tens of thousands of Americans — more people than are killed by firearms. And, in the face of a deadly opioid crisis, the Trump administration proposes more of the tried-and-failed same: tough-on-drugs law enforcement that scapegoats immigrants and a just-say-no drug prevention approach, both of which prevent access to life-saving services.

Emily Harris from Ella Baker Center for Human Rights on how punitive drug policies have fed the horror of mass incarceration, and the path to reform the criminal justice system.

Armando Gudino from Drug Policy Alliance on how drug policy has been used as a tool to criminalize the poor and communities of color, and on the link between drug war mass detentions and the war on immigrants.

Patt Denning from Harm Reduction Therapy Center on the public health consequences of the “just-say-no” approach to drug use, and how shifting to a harm reduction model is an indispensable part of reducing the harms drugs can cause to individuals and to society.

Chris Wakefield & Kaine Cherry from The Hood Incubator on new efforts to address historic racial inequities that resurfaced in the legal marijuana industry.