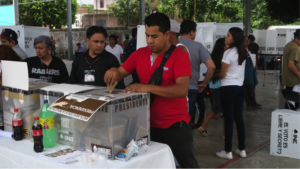 I have observed elections in Mexico for the last 24 years, and I have to say, it felt pretty good to see Mexicans resolute that THIS time no one would steal their victory; that THIS time the discredited oligarchs would not get another free pass; that THIS time the will of the people would be so overwhelming that none of the tricks of the past would detain the popular will.

That’s not to say that the old order went down without a fight. Vote buying schemes were afoot in many electoral districts. Nevertheless, civic attentiveness and public engagement were vital safeguards of the process.  The pressure of 30,000 Mexican election observers (and nearly a thousand international “visitors”) no doubt helped, but more important was that MORENA party representatives were present at virtually every polling station.

The problem for the political manipulation professionals was that Mexico had been down this road before. Their attempts to redbait and stigmatize President-elect Andrés Manuel López Obrador fell on deaf ears.  And though observers on the ground have documented widespread vote buying, intimidation, and other electoral crimes, Mexican voters gave Andrés Manuel López Obrador a historic landslide 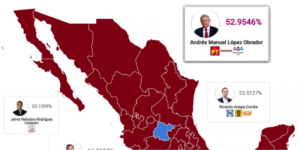 Figure 1 Every state in Mexico except Guanajuato voted for Andrés Manuel López Obrador. The once formidable PRI lost in every state and won just 13.5% of the vote nationwide.

The stunning result are in — Andres Manuel Lopez Obrador has won the presidency and his MORENA party will wield majorities in both houses of congress.

Victory was swift. On Election night in Temixco, we were at polling stations where ballot counting had not even gotten underway when the news that the PRI and PAN candidates had conceded in the face of a MORENA landslide. As the votes were counted by hand and called out loud in front of party representatives and dozens of citizens who gathered to assure honesty, the sound of MORENA became mantra-like as their victory margins grew. 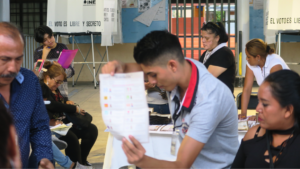 As the night wore on and dedicated poll workers continued their work into the wee hours, congratulations poured in for the President–elect. We listened at the home of David Roman Porcayo, a Temixco citizen observer (and my friend for the last 35 years) as Obrador’s voice crackled over the radio…striking a humble and reconciliatory stance, while promising to work to end the violence plaguing Mexico, tackling institutional corruption, and ending impunity while respecting Indigenous people and implementing the San Andres Accords.  There was a lot more. You can listen to the speech here.

The stunning victory of the opposition sent out ripples of excitement and smiles on the faces of many people we spoke with deep into the night and early the next day.

Many reflected to us that they were tired of politics as usual and are ready to work with the new president, while holding him accountable to his many promises. Several MORENA supporters told us, “this vote is not a blank check.”

Among those we spoke with was Javier Sicilia, the poet who led Mexico’s Movement for Peace with Justice with Dignity.  Javier though a long time skeptic of MORENA was impressed by the determination of people to vote and said he would respond to the call López Obrador made in his acceptance speech  — for human rights and non-governmental organizations to join him in working to end violence and impunity.

Mexico’s challenges remain deep and success is not guaranteed, but Mexico has made its decision and put hope back on the streets.

There is no doubt that this seismic electoral event will change the relationship between the US and Mexico.  So far Trump has maintained a respectful tone toward Mexico’s new President and has refrained from talking about his “wall” in an initial phone conversation with Mexico’s President-elect.  That truce seems unlikely to last.

Global Exchange will be closely monitoring developments on this front, and we will do our best to keep you informed. We remain deeply committed to a positive transformation of the bi-national relationship with policies that support the dignity of Mexicans who choose to migrate and create conditions for those who don’t want to migrate to prosper at home. We must act to end the flow of murderous weapons from the US to Mexico and end the drug war.

These are some of the key challenges facing those of us who want a better bi-national future.  Meeting this challenge on our side of the border means we need to transform our political landscape.

We should take a cue from our sisters and brothers in Mexico –put our political depression aside, stop listening to our demagogue leaders and vote massively to transform our legislatures for the better this November. Take action with Global Exchange’s 2018 Town Hall Summer.