Time to End the Flow of Arms to Mexico 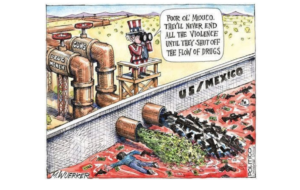 This year violence in Mexico continues at record-high levels, while the Pentagon and State Department sponsor military exercises with the Mexican military, sell thousands of weapons to Mexico, and pursue a devastating drug war. This week we have an opportunity to get Congress to push back against these destructive policies.

Please contact your Congressional Representative today to urge her/him to sign the “Dear Colleague” letter from Rep. Keith Ellison that calls for a full review of U.S. military and police aid and arms sales to Mexico.

The United States has long supported military approaches in Mexico that have resulted in tragedy. From 2008 to 2017, the State Department poured over $450 million to Mexico’s military and police, and the Pentagon spent over $550 million in drug war military aid. The results are devastating: more than 29,000 homicides in Mexico last year, and an increasing number of atrocities committed by the military on counter-drug operations.

That’s why Rep. Ellison is circulating a Congressional letter urging the administration to conduct a full and public assessment of U.S. security assistance to Mexico and to suspend U.S. support for internal policing by military forces.

It is crucial that Congressional members hear from you to ask them to sign this letter, which is supported by Global Exchange, Mexican Commission for Defense and Promotion of Human Rights, Americas Programs, Latin America Working Group, American Friends Service Committee, Washington Office on Latin America, and Witness for Peace.

Here is a short script you can use:  ”My name is ____, and I am a constituent.  I urge Representative  ______ to sign on Representative Keith Ellison’s letter calling on the Administration to conduct a full and public evaluation of military and police aid and arms sales to Mexico and to suspend any U.S. funding of abusive armed forces. Mexico’s massive military deployment in the drug war is contributing to more human rights violations, and its highest homicide rate in history. U.S. funding should not be contributing to this. Please urge your boss to sign the Ellison dear colleague letter on Mexico.”

Thank you for taking action.

We write to urge you to conduct a full and public assessment of U.S. security assistance to Mexico. We are concerned that U.S. funds may be furthering cycles of violence and enabling human rights violations by the Mexican military.

The Mexican government has deployed tens of thousands of Mexican soldiers in its counter-drug efforts. These armed forces are trained for warfare rather than for police duties, as confirmed by Mexican Defense Secretary General Salvador Cienfuegos. [1] Studies have shown that the deployment of Mexican military forces in law enforcement has led to increases in homicides. In 2017, Mexico experienced the highest homicide rate in its recorded history. [2]

The use of  Mexican military forces in the war on drugs has also resulted in a dramatic increase in human rights violations, including torture, forced disappearances, and extrajudicial executions. Fewer than four percent of Mexican investigations of abuses allegedly committed by soldiers between 2012 and 2016 have resulted in convictions in civilian courts. [3]

Mexican President Enrique Peña Nieto institutionalized this militarized approach by signing the Internal Security Law in December 2017. This law enables the military to intervene in domestic criminal investigations and limits access to information regarding events that occur during military operations, including military abuses. National and international experts and institutions, including the UN High Commissioner for Human Rights, the Inter-American Commission on Human Rights, and Mexico’s National Human Rights Commission actively oppose the Internal Security Law.

Between 2008 and 2017, the State Department appropriated more than $465.9 million to Mexico’s armed forces through foreign military financing. [4] In the last decade, the Department of Defense provided Mexico with more than $550 million in counter-drug assistance. [5] We are concerned that this funding supports and encourages militarizing public safety, leading to higher levels of violence and impunity.

Protection of human rights and civilian security should be fundamental goals in the United States bilateral agenda with Mexico. We urge you to suspend any U.S. financing of armed forces involvement in Mexico’s public security operations and focus on supporting efforts to advance the rule of law, investigate and prosecute human rights violations, and combat corruption, particularly along the trafficking route.

We urge you to conduct a full and public evaluation of the Merida Initiative, U.S. security aid and arms sales to Mexico to inform future funding decisions and ensure that U.S. security aid and trade do not support further human rights violations and violence. The evaluation should have clear metrics, include input from civil society, and address the implications for public safety, human rights and the rule of law.

We appreciate your consideration of this request.