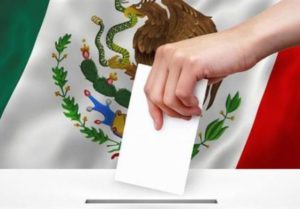 Mexico is heading toward crucial elections on July 1st, at a moment of great internal distress and international pressure. Nationwide, violence is at an all time high, impunity continues to reign, and confidence in governing institutions is at an all time low. At the same time, Mexico faces open disrespect and hostility from a racist American president who has replaced traditional bi-national diplomacy with threats, bullying and lies. It is time for friends of Mexico to step-up.

That is why for the first time in twelve years, Global Exchange is convening two international missions to observe, investigate, and report on Mexico’s election.

Global Exchange has organized election observations in more than a dozen countries since 1993. We have organized ten observation missions in Mexico starting in 1994, including presidential, midterm, state and even municipal elections.

Between 1994 and 2006 we worked with hundreds of observers and maintained active partnership with non-partisan democracy and human rights advocates in Mexican and international civil society.

Our observation efforts have always been conducted in the spirit of democratic solidarity and absolute respect for Mexican sovereignty. We oppose any foreign intervention in Mexico’s electoral process and have sought to flag and counter any attempts, especially by the United States, to influence electoral outcomes.

Much has changed in Mexico since the last time Global Exchange observed elections during the disputed election process of 2006.

We do believe our struggles for human rights and democracy are inextricably linked across borders and that our movements must reflect that.

The messy ending of the 2006 election did not include a full recount – as recommended by independent observers including Global Exchange. As a result, Felipe Calderón’s legitimacy was contested as he assumed his presidency. His fateful decision to escalate the drug war with major deployment of the armed forces was made in that context.

By the time Calderón left office six years later, more than 60,000 Mexicans had died, and a movement led by victims of violence had grown up to repudiate his disastrous drug war policies.

In 2012, due to widespread violence, observation missions were more complicated and longstanding partners like Alianza Civica were no longer coordinating national observation.

Rather than observe elections in 2012, Global Exchange worked with the leaders of Mexico’s victim led Movement for Peace with Justice and Dignity and hundreds of organizations they convened on both sides of the U.S.-Mexico border to launch a major caravan from San Diego to Washington, DC bringing their call for peace, justice, and ending to the drug war to people and leaders in 27 cities across the United States.

Enrique Peña Nieto of the PRI, who won in 2012, returned the former ruling party (that had ruled without interruption from 1929-2000) back to power. Peña’s rule has been marked by corruption and impunity for major crimes, the most notorious being the cover-up of the forced disappearances of 43 students from the Ayotzinapa teachers’ college in September 2014. Peña Nieto is ending his term in office with a record low approval rating.

Mexico’s 2018 elections are important in traditional electoral terms. From the perspective of human rights defenders, they also provide a moment to reflect on how the deterioration of public security generates fear and undermines political liberty.

In political terms the 2018 elections mark the beginning of a new “sexenio” – the six-year cycle of Mexican politics. e Presidency, half the Senate, the entire Lower Chamber of the legislature, and an unprecedented number of governorships are all up for grabs. Furthermore, early polling shows a high likelihood that the ruling PRI will be forced out. 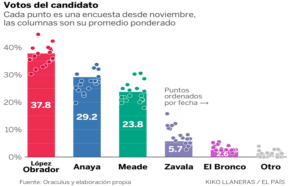 shows preferences in the presidential race averaged from polls (see dots) taken since November. These aggregated polls make clear that center-left candidate Manuel López Obrador of the Movement for National Renovation (MORENA) has held a consistent lead for months. Meanwhile, Ricardo Anaya of the unlikely PAN-PRD coalition has consolidated support, apparently benefitting as Antonio Meade, the PRI candidate, slips backward. e independent candidacies of Margarita Zavala and “El Bronco” have not caught fire. Between both, they share less than ten percent of voter preference.

Many analysts believe this is still a potentially tight race, despite the consistent polling that shows López Obrador having maintained a significant lead for months. They speculate that if Antonio Meade’s poll numbers slip further and his candidacy shows signs of collapses, his remaining supporters may look for a new political home and would be more likely to consolidate around establishment friendly Ricardo Anaya than Andres Manuel López Obrador, the center left candidate.

If polls tighten, the temptation of electoral fraud will grow. And, as the recent irregularities during last year’s governor’s election in the state of Mexico illustrated, systematic fraud with high-level collusion can still swing elections in Mexico.

To learn more about how to join Global Exchange’s observation missions in May and June, contact ted@globalexchage.org.