Solidarity with the National Strike in Honduras!

Thousands took to the streets in Honduras, marking the start of a weeklong Nationalstrike opposing the January 27th“swearing-in” of  fraudulently “re-elected” President, Juan Orlando Hernandez (JOH) and the deadly repression that has followed.

More than 30 people have already been killed during protests against the disputed election. Hundreds of others have been arrested, injured, or tortured. Nevertheless, the Honduran people are resolute in rejecting both these government sanctioned attacks and the fraudulent results of the November 26 elections.

As thousands of Hondurans courageously take to the streets in protest of election fraud and government repression they are asking us to stand in solidarity with their fight for justice and democracy.

Ask your member of Congress to speak out against this crime against democracy and end U.S. aid to the illegitimate regime.

Explain to them the importance of speaking out in the face of this crystal clear example of election fraud — perpetrated against poor people in a country dominated by U.S. business and political interests and that has “hosted” U.S. military bases since the 1980s.

The US could easily influence Honduras to follow democratic norms, but it chooses instead to continue high levels of  military and police aid that strengthen the hand of the Honduran oligarchy.

It is hard to speak the truth about Honduras. There is a shameful bipartisan tradition of supporting repression in Honduras. Just as the Trump State Department is working to undermine international critics of the election (like the Organization of American States) just as the Obama State Department under Hillary Clinton did after the 2009 military coup.

We need to speak out, not just for the Hondurans, but for the sake of our own democracy.

Here is what we have planned: 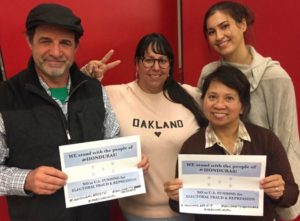 And if you have other ideas or suggestions, please feel free to contact us.