Trump’s Wrong Way on Afghanistan – a formula for endless war. 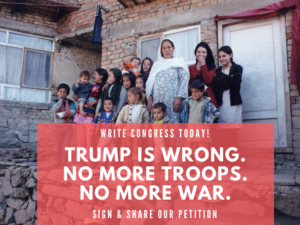 Trump is wrong. No more troops. No more war.

Last night Donald Trump broke his campaign pledge to end the war in Afghanistan. Instead, he doubled down on failure, saying he would bring America “victory” in the war that George Bush started and that Barack Obama continued – until it became America’s longest war  — ever.

Global Exchange has been warning of the dangers of occupying Afghanistan since we invaded just after the attacks of September 11, 2001.  We opposed the war at its start when 90% of Americans backed it — urged by Bush to celebrate a show of strength in the wake of the horrendous attack on New York City.

We warned that the history of other occupations of Afghanistan had ended badly for the invaders.  The British Empire got bogged down there without victory in 1800s and the Soviet occupation of Afghanistan in the 1980s (“their Vietnam”) was disastrous. It was a key factor in the total collapse of the USSR a decade later.

But Trump thinks he will “win” despite evidence to the contrary based on the bitter experience of the last 16 years of war. Trump says we should forget about “nation building”. Instead, he says, we should follow what he calls “principled realism”: stay on the attack, don’t reveal how many troops we are adding, and go harder after our ally, Pakistan, who he says “harbors criminals and terrorists.”

Trump says we must stay in Afghanistan to avoid creating a “vacuum of power” that will be filled by terrorists. And he says we must continue the mission to honor those who have [already] died.

Continuing this ill-fated mission just increases the death and does nothing to build peace.  We mourn for the over 90,000 Afghans and the 2400 US Soldiers who have died in the conflict.

But enough is enough.  It is past time to get out of Afghanistan and past time to put up with more prevarication from the Trump Administration.

Please take action and write your member of congress to say Bring our Troops Home, No More U.S. Wars in South Asia.