Trump’s new NAFTA? NO Thanks! 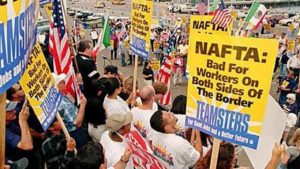 NAFTA renegotiations with Canada and Mexico, triggered by Trump last May –officially start on August 16th.

We are deeply skeptical of Trump’s intentions because his racist, plutocrat agenda infuses everything he touches. So even when he moves on issues where we might imagine common ground – such as questioning NAFTA and wanting it renegotiated – it becomes tainted and unacceptable.

Ted Lewis of Global Exchange and Will Wiltschko of the California Trade Justice Coalition make that case in an SF Chronicle oped published this morning.

“Trump’s 2016 message on trade was blunt and exuded animosity toward Mexicans and other foreigners, but it resonated with millions of Americans, especially in places where life has changed for the worse since NAFTA was ratified almost a quarter century ago.  But Trump’s new NAFTA won’t help people in places where good jobs have vanished and today’s wages don’t keep up with living costs.”

Trump’s “update to NAFTA” is a fraud.  Please read the oped and join us in contacting congress to let them know we’ll be saying no to any attempt by Trump and his billionaire cronies to make a bad thing worse.