This blog was written by Global Exchange Executive Director, Jeff Ordower.  Ordower traveled to the Occupied Territories in 2007, was changed by his time in Hebron and Ramallah and helped start the St. Louis Jewish Voice for Peace Chapter.

This year sadly marks 50 years in which Israel has occupied Palestinian Territories seized after the 1967 war.  The Occupation has been brutal.  Israel determines where Palestinians can live and work.  Checkpoints are omnipresent, and the apartheid state has roads closed to Palestinians but open to settlers.  Palestinians not only face an armed occupying force 24/7, but are also monitored by the latest technologies.

The United States props up this “temporary” state of occupation by providing Israel with more military aid than all other countries combined. Israel, in return, sponsors what we are calling the Deadly Exchange program, where Police officials from all over the United States travel to Israel to learn the latest in policing and surveillance.

Nowhere is this combined militarism on full display every year than at New York City’s Celebrate Israel Parade. There are three separate New York Police formations in the parade, and a contingent of Friends of the Israeli Defense Forces. 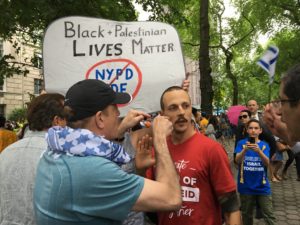 This year, Jewish Voice for Peace (JVP), where I am a member, decided to follow the lead of activists who have disrupted the parade every year and engage in some larger disruptions, protesting 50 years of illegal occupation, as well as the Deadly Police Exchanges.

As an experienced direct action person, I was fortunate enough to be part of the planning team for the disruptions.  JVP recruited members and leaders from all across the Eastern Seaboard to participate in the action, who self-organized into “Affinity Groups.” The idea of an affinity group in direct action,  is to provide a higher level of comfort and coordination for people to engage in action together.  Rather than showing up and being told the plan,  a group of friends, or members of JVP,  can all form an affinity group together and decide collective what kind of action they will take. 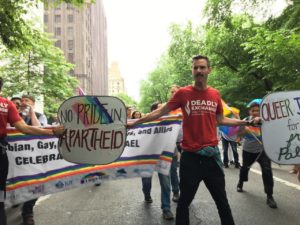 Affinity groups then meet together as a Spokescouncil, with there being common support that ties all the actions together, the most common being jail and legal support, communications and media, technical support, and often common art builds that undergird the Spokescouncil.  As the Spokescouncil meets together, groups tell each other a little bit about their plans, coordinate timing, and make adjustments, and support people can make sure that everyone is kept safe.

As you can see from the video here, the affinity groups did an amazing job of disrupting the parade and getting their message out.

Jewish Voice for Peace’s work is one piece of a larger puzzle that is resisting racist police and unjust militarization, at home and in the Occupied Territories of Palestine.  Global Exchange’s recent Caravan Against Fear showed too clearly the militarization of the US-Mexico border and the ways in which our border guards act with impunity as well.   We need to diminish the power of the police and militarization and increase the power of community, restorative justice and basic rights to autonomy on self determination.  Let’s tear down all those walls.

Learn more about the Deadly Exchange campaign – one critical piece of the puzzle.