Ecuador, Oil and the Yasuní

Posted by Derek Poppert on September 2, 2016

The Yasuní region of the Amazon rainforest is one of the most precious and important areas on the entire planet.

The region includes a UNESCO world biosphere reserve that many scientists consider to be the most biologically diverse region on Earth. One hectare of the area is home to a richer mix of trees, birds, amphibians, and reptiles than the US and Canada combined.

One big problem: the area also sits on top of lots of oil. 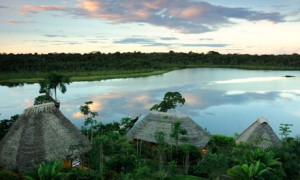 In 2007, President Rafael Correa unveiled the Yasuni Ishpingo-Tambococha-Tiputini (ITT) initiative, an innovative project aimed to keep oil in the ground under a pristine corner of Yasuní National Park in return for donations from the international community equal to half of the projected oil revenues from the area.

In 2013, however, the plan was scrapped due to insufficient donations from the international community; oil exploration permits were promptly signed and oil drilling was approved, estimated to begin by 2016.

Travel to Ecuador this New Year’s to learn about the powerful movements to save the Amazon, despite the ITT initiative’s failure.

On our Reality Tour, Ecuador: Social and Environmental Justice in the Andes and the Amazon, travel to the northern Amazon region to look at the damaging effects of oil and other extractive industries, while experiencing the breathtaking diversity and beauty of the Amazon rainforest. You will spend New Year’s Eve in the Yasuní region and participate in a local celebration. Meet with indigenous leaders and healers, and visit ecotourism projects that provide alternatives to oil and logging. Also learn about the historic ongoing court-battle against Chevron and its toxic legacy of oil exploitation in Ecuador. Back in Quito, discuss environmental, social, and economic rights with activists and leaders.

We hope you can kick off the new year in a special way by participating in this amazing travel experience.

Check out our full list of Reality Tours here