Displacement and Repression in Rio: The High Cost of the 2016 Olympic Games

It is inspiring because she hails from a particularly notorious favela in Rio de Janeiro, having faced steep odds to rise to the top of her sport as a black woman in a poor and highly-marginalized community, the same favela depicted in the famous Brazilian movie named after the favela itself: The City of God.

It is symbolic because it is this exact type of community – the many favelas spread out across Rio de Janeiro – that have paid the highest price to host the 2016 Olympic games. And yet it is a young black woman from a favela in Rio de Janeiro who won Brazil’s first gold: a symbol of triumph, redemption and hope for those who daily feel the effects of the Olympics on their lives in Rio’s favelas: the police incursions, the bulldozing of their homes, the racial targeting, the stigmatization of their communities in the media.

Lost in NBC’s nightly primetime coverage is the reality that the highest cost of hosting these Olympics is not even the $11.9 billion price tag in the face of economic contraction, poverty, political crisis and vast inequality: it is the displacement and repression of Brazil’s most vulnerable communities. 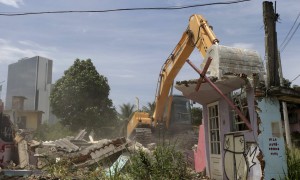 What most people tuning into NBC might not know is that over 60,000 people have been forcefully displaced from their homes in Rio de Janeiro to make way for Olympic-related construction. The vast majority of those displaced live in favelas: low-income communities (incorrectly referred to as “slums” in most western media) that informally established themselves on city outskirts decades ago but have since become high-functioning communities and sustainable forms of low-income, close-quarter urban living.

Whole neighborhoods have been clear cut to make room for construction projects mainly geared towards foreigners and the Brazilian elite: the Olympic village, new bus and metro lines, luxury condominiums. The Olympics were perfect justification for real estate developers to do what they have long wanted to do near the current Olympics venues in the south of Rio: get rid of the poorer communities that keep real estate values from ballooning like they do all along the waterfront of other parts of Rio.

Favelas are often stigmatized in Brazil as “lesser” than other communities and have a reputation of drugs and violence – stereotypes perpetuated by portrayals such as that in the movie The City of God, which for most westerners is perhaps the only experience they will ever have with a Brazilian favela. Violence and the drug trade certainly do exist in favelas, but much of the violence occurs at the hands of the state. The Olympics were used as justification not only for mass displacement and eviction, but for an enormous police-military buildup and a swift crackdown on basic civil liberties, particularly in poor areas. The Olympics called for “security”, and this allowed the heavy hand of the Brazilian police further power to do what it has long done to fight the drug trade: home incursions without legal process, arbitrary search and seizures, kidnapping, torture, racial profiling and homicides with near impunity.

A security force of 85,000 has arrived in Rio to “keep the peace” during the Olympics. But while a military build-up along Rio’s tourist areas in Copacabana and Ipanema gives the impression of security, repression meanwhile occurs in the city’s poor areas that tourists will never see.

If this all sounds familiar, you’d be right – the World Cup two years ago highlighted the exact same issues. Profit and sport at the expense of people and human rights. Displacement in the name of preparation and police violence in the name of security. Then it was FIFA that was co-responsible, now it’s the IOC (International Olympic Committee).

As Amnesty International Brazil puts it:

We’ve seen this before. In 2014 – the year that Brazil hosted the FIFA World Cup – police killings in Rio de Janeiro state shot up by 40%. Police and military forces were deployed as part of ‘public security’ plans. As tensions rose, they repressed protestors with brutality and unleashed lethal violence in favelas. ‘Shoot first, ask questions later’. No one was held to account; security forces got away with murder. Right now, these same kinds of ‘public security’ plans are being put in place for the 2016 Games. 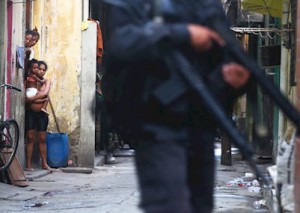 The IOC should be ashamed it has allowed the preparations for the 2016 Olympics to proceed in the manner it has, in the face of such tragedies over the past 7 years since Rio won the Olympic bid. It should be ashamed it did not demand a better way to go forward with Olympic preparations. The IOC’s claim that they and the Olympics are “a-political” is an illusion: nothing in this world is a-political, and certainly nothing as massive, global and cash-infused as the Olympics. The Olympics are intrinsically and inevitably connected to enormous political, social and economic ramifications, and the IOC should have the backbone to stand up for what is right while it makes its plans for the bi-annual event with the host country.

We take this opportunity to lend a voice of solidarity to the groups on the ground in Rio and across Brazil opposing these tremendous forces of money and power: the organizers, the community groups, the peaceful protestors. Olympic competition is an incredible sight to behold, but it should never come at the price of people, communities and human rights.