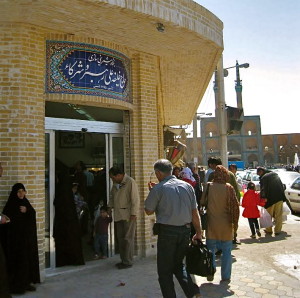 I opened the box with care, I had been of course waiting for this moment for two years.  I lift out the delicate pink paper insert with the vintage oval photographs of the three founders of the shirini (sweets) shop.  I gently unraveled the plastic bag and gazed upon the yellow fluffy substance before me.  One would not think that this treat would be so incredibly tasty based on it’s appearance, something comparable to that of fibrous building insulation.  I dug in with my fingers to the slightly sticky fluff, pinched a bit between my fingers, leaned in a bit so as not to drop any precious bits and then quickly popped the pinch in my mouth. Mmm…I closed my eyes, it was just as I remembered; a delicate sweet saffron flavor and light cardamom scent.  As the deliciously strange pashmak melted away in my mouth – I am again transformed to my first Citizen Diplomacy Reality Tour to Iran in 2014.  It was during this trip that I first tasted the cotton candy-like treat while standing on the corner of a bustling intersection in the city of Yazd.

Our group of twelve participants had just left that famous sweet shop where a group of women in brightly colored hijabs asked our guide, “Are they American?  Wow!  They don’t look like the devils as our government says.  Why would they say that about them?  They actually look very nice and friendly.”  Our guide Bahman smiled big and affirmed that we are American and that of course we’re not the devil.  He urged them to talk to us and, while three of the four were too shy, one boldly stood up, greeted us with a warm “salaam salaam” (hello).  She then smiled big and started taking selfies with a few ladies in our group.  It’s a scene I remember fondly and in vivid detail.

That trip two years ago was life changing; a learning experience like no other.  Culturally speaking Iran was like a metaphorical bazaar for the senses;  what one could taste, smell, touch, hear and see at every turn was eye-opening and mesmerizing.  From cities to small towns it was uncertain what we would encounter yet we were open to it all.  For me this first trip was about finally gaining some hands-on knowledge about travel in Iran so that in the future I would be able to advise participants from a place of experience.  As a group we were hungry for real knowledge of “other”, to dismantle the xenophobic ideas perpetuated historically by the US Government and media, as much as we could regardless of our inability to speak the language. 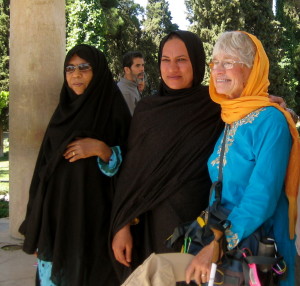 Audre making friends at the tomb of Hafez

Events that also remain vivid of this trip include a moment at the splendorous tomb of the poet Hafez in Shiraz, when two women in billowing black chador carefully floated towards Audre, one of our participants, as she stood below the arches taking in the beautiful garden scene.  It began with a gentle exchange of smiles followed with a “salam”, then as they moved in a bit closer towards one another they attempted a short conversation in broken Persian and English. Audre’s “man Am-ree-ka-e-am”, (I am American) was met with surprise and big smiles, a laugh and a warm “welcome to my country.”  Cell phones emerged from pockets and handbags, people gathered around, and began snapping photos and selfies with the harmless American lady followed by handshakes and giggles.

Another fond memory I have was in Isfahan when Maureen, another participant, and I decided to take advantage of the cool evening breeze and head out for a short stroll around our hotel.  We had been in the bus most of the day and our bodies welcomed the ability to stretch before we headed off to yet another culinary adventure in the hours to come.  We walked a few blocks to the north and found a mini-mall where large numbers of young men gathered around televisions mouths agape as they watched a very important football (soccer) match.  We momentarily took it in and then turned around to explore the other direction.  We passed sweet shops, carpet dealers, pharmacies, and families also out enjoying the cool evening.  Only a block past our hotel, we came upon a tiny shop, gorgeous colorful scarves draped from the open entry and swayed in the breeze, beckoning us to come in for a look.  The small shop’s shelves and cases were tightly packed with scarves.  The woman behind the counter quickly hung up the phone, adjusted her hijab and smiled big while offering us assistance.  After nearly an hour of severely broken conversations in English and Persian, mountains of laughs and scarves later, we learned about our new friend Hediyeh, her family and boyfriend, and she learned what she could about our lives in Amreekah.

It’s now 2016 and I find myself back in Iran with a group of former Peace Corps volunteers,  some of whom speak Farsi.  We pile into the bus after a quick stop at the sweet shop and it is there that I take that sweet bite of pashmak that I’ve so been looking forward to.  Much has changed since I was here last; the Iran nuclear deal was signed, diplomacy is now being restored little by little, sanctions are being eased and now, I have nearly two years of Farsi classes under my belt and I also have new Persian friends and experiences that have brought me closer to the culture.

Touching down in Tehran I was nervous about speaking Persian (what we call the the Farsi language in English), though I knew I had worked hard for this and that my desire to communicate and learn was far greater than the fear.  And as it turns out, I would find that the experiences unfolded over the next 15 days were very different because of my closer connection to the language and culture. 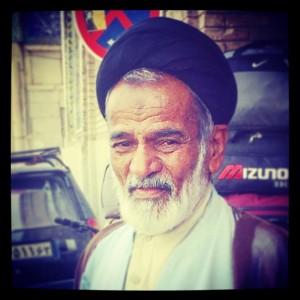 “Welcome, we love Americans!” said the petite and sweet faced Mulah (broadly defined as an educated  religious man of Islam) at the religious school in Shiraz — we smiled and thanked him profusely for his   kindness and warmth.  One of our participants quickly inquired about the oddity of him being so welcoming to Americans and he smiled and said something along the lines of, “well, sometimes we are wrong in our perceptions of people.”  It was remarkable.  Later, in the warm desert town of Meybod, as we ascended the dusty adobe-like steps of an old caravanserai, we were met by a professor of engineering and his wife enjoying the historic site.  The professor was talkative yet stern with our group, it would be my first time hearing someone openly criticize the US government, “The United States government is really seated in the Middle East you know; in the pocket of Israel.”  “Nothing will really change until this aspect of your countries politics change — though of course, we remain hopeful.”  It was refreshing for all of us to hear a candid counter opinion from someone we met.

In the evening over dinner, we would often swap stories about our daily encounters.  Many of us had heard from the locals that nothing had really changed economically for Iran since the sanctions were reportedly lifted.  In the Grand Bazaar of Isfahan, I had an exchange with a silversmith.  He explained, “We are still struggling as a people.  The industries and businesses are the only ones that see changes – the common population does not.  Inflation is still high and we must pay high prices for daily necessities, we will likely not see any changes at our level for many years, for many it’s as though the sanctions are still in place.”

The ability to have more in-depth conversations on this trip, about daily life in Iran was refreshing.  Communicating with Iranians on a human level – outside of politics and foreign relations – was heartfelt and deeply enriching to my experience and learning.  It’s the most perfect example of Citizen Diplomacy that I always hope for myself and my participants.  It is the proof that understanding and deeper connections take time – it’s not an agreement made or a sanction lifted that then suddenly gives you a friendship or solid diplomacy.  It’s taking the time to move beyond headlines and to learn about a culture and the language, and to see one another through the lens of human connection, to find that which we have in common and respecting and finding the beauty in the things that make us unique. 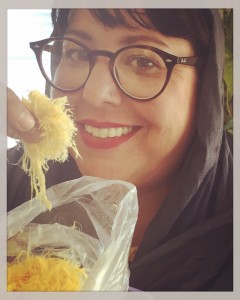 Today I continue my studies of the Persian language and culture while complimenting it with emails and online chats with new found friends in Iran.  I think with intention about my next trip in the Spring following the Persian New Year, Nowruz.  I look forward to continuing to foster and create the positive connections between our nations by way of these very fortunate people-to-people exchanges.  And then, when I feel that ache and longing to connect to these moments in Iran again, I pull out a box of Pashmak from my freezer, take a careful pinch of the sweet, close my eyes and drop the morsel in my mouth, letting it slowly melt away to reveal again a delicious and surprising taste of Iran.

Please visit www.realitytours.org to view our upcoming trips to Iran and other Middle East destinations.  You may also email Drea directly at middleeast@globalexchange.org