The Economic and Environmental Justice tour of Argentina and Uruguay: Reflections by Rick Moniz

Rick Moniz, long time friend of Global Exchange and cofounder of Knowing the Way Travel, reflects here on another successful Custom Reality Tour. After working with the Global Exchange team to design a custom schedule and market the program, he was joined by 8 other participants on this remarkable 2 week journey to Argentina. Read on to hear more about his experience.

The military coup against the Argentine people on March 24, 1976 launched the Dirty War, leading to the death and disappearance of tens of thousands of the nation’s populace.  Another facet of the coup was the stealing of babies from their mothers – sometimes killing the mothers – and sending them out for adoption.  The Mother’s campaign called the world’s attention to this reprehensible facet of the Dirty War and,

indirectly, the war against the people itself.  Our trip to Buenos Aires took place at the time of the commemoration of that sad chapter in the nation’s history.  March 24, 2016 was the 40th anniversary of the coup.

We arrived several days in advance of the rallies that brought – perhaps – a million people out into the streets.  Our activities had included a talk with the journalist and professor Sergio Ciancaglini, who covered the trials against the generals responsible for the Dirty War.  Sergio provided a sweeping view of the nation’s history and the recent chapters in Argentina’s story.  We also met one day with economist Alan Cibilis, who shared an update on the nation’s state of affairs. Interestingly President Obama was in Buenos Aires for a meeting with the new president Mauricio Mecri. The presidents left the city for a golf date on March 24th.

As we walked amongst the crowds, we enjoyed the camaraderie and noticed the many families that came out with their children.  It was a 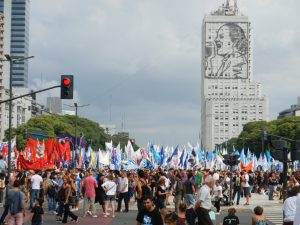 peaceful affair.  We observed organized groups came from throughout the city to the Plaza de Mayo.  That evening, the jubilant crowds continued marching in the streets.  There were no acts of violence or disturbances that day.  It will a demonstration of a people dedicated to NUNCA MAS (never again.)

Parque la Memoria is dedicated to those who lost their lives during the military rule.  We visited the park and walked amid a vast array ofwarning signs depicting the horrors of dictatorship and its consequences.  Our leader, Delia Marx, lost a family member.  Many Argentines lost loved ones.  Our day took us to the notorious EX ESMA museum, that is dedicated to remembrance.  The Dirty War is Argentina’s holocaust of recent times, and there are many facets of this ugly period. 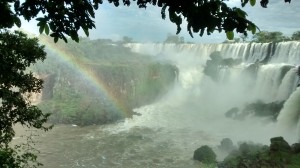 Our trip to Bunos Aires explored a vibrant city of culture with its museums, markets, barrios and array of sites and sounds.  We enjoyed tango, visited a cooperative, a foster home and walked the many neighborhoods of the city.  Our journey took us up the Parana River to the Ibera Wetlands (an amazing oasis, isolated and rife with flora and fauna), the Jesuit Misiones, an amethyst mine and the incomparable Iguacu Falls.  Our journey was over the course of five days by bus, four wheeler, and vans, returning to Buenas Aires by air.  A short ferry ride took us the Colonia and Montevideo in Uruguay.

While many travel to Argentina to see the beauty of Patagonia and the vast coastal stretches reaching towards the end of the continent, our journey was immensely different.  We experienced the La Plata region, unlike any other.  Then again, we are life long learners, travelers seeking to appreciate a world of diversity.