Join a GX tour and have a life-changing experience

A Reflection by Laura Stokes , in the Progressive Democrats of America’s Digest

Many of us have wanted Bernie Sanders to speak more clearly and forcefully about his foreign policy. I understand why he is focusing on what seems to be most important to Americans right now. But our relationship to the rest of the world is of great concern to me and should be of great concern to all Americans because our foreign policy influences our domestic policies in profound ways, especially in regards to security and economics.

That is why Paul and I have made several trips with Global Exchange – exploring a country in ways not experienced by an ordinary tourist. We have marched with Chavistas in Venezuela, visited with revolutionary journalists who tell the real story of Latin America, eaten and danced in the homes of ordinary, poor by our standards, people and founders of co-ops in Costa Rica, visited with co-op farmers in the mountains of Venezuela, marched with the Madres of the disappeared in Argentina, talked with scholars of alternative economies, stayed in a hotel in Argentina owned by the workers, met and talked with a victim of torture during the Pinochet regime as well as representatives of displaced indigenous peoples in Chile, and had many more life- changing experiences too numerous to mention.  I don’t want to forget to say that we also managed to taste lots of good wine and eat lots of great food, well, great food most of the time. These experiences are enhanced and enriched by knowledgeable, charming and very caring GX guides who live in the individual countries. We have marveled at the contacts Global Exchange has in these countries. 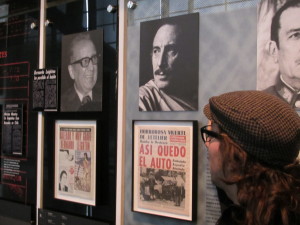 I have been most interested in Latin America because of the US intervention in those countries and our culpability in their thwarted efforts to achieve Democracy. I believe Americans should know more about our continuing racist role of exploitation and meddling in these countries, way beyond and different from what the US press, with just a few exceptions, presents to the American public. I was reminded once again of persistent US government policy of aggression when I heard Juan Gonzales of Democracy Now! question Hillary Clinton about her role in the 2009 coup in Honduras. Without any apology, she justified her support of the coup and the tyrant who took over the country and when asked about the human rights abuses in Honduras, said that the US should be using more of its “leverage” in Latin America. That word sent chills down my spine. We can’t stop the violence or racism in our own country till we learn to practice Democracy and the Golden Rule with all the people of the world.

Paul and I have had the privilege of traveling relatively often and far and spent several years living abroad. Nothing has taught us as much about the world as GX. We have chosen to focus on Latin  America but GX goes to most developing countries. Below is an example of an upcoming tour.

The Socio-Environmental Justice tour of Ecuador

On a Global Exchange delegation to Ecuador you will meet with local organizations, politicians, journalists, farm workers, and native communities to speak about the local, regional, and global effects of corporate globalization. These affiliates will introduce you to some of the most successful local and international efforts to bring environmental justice to the Andes and the Amazon.