Anne Kass and her group of 6 friends have just returned from their second Custom Reality Tour with Global Exchange. Read on for her insightful reflections on their 9 days in Chile:

As many US citizens as possible should travel to, read about or otherwise educate themselves about Chile.   It is a country that was decimated by a right-wing, neo-liberal “government”, albeit not an elected government.   Pinochet took control via an overt military coup (to be differentiated from the judicial coup that took place in the US in 2000).   The coup in Chile was aided and abetted–orchestrated more likely–by Richard Nixon and Henry Kissinger.  Then injury was added to insult as what has become known as “The Chicago Boys”–Milton Friedman’s toadies–helped bring about the economic disaster that is Chile today. 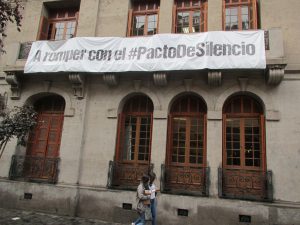 A neighbor who knew we were traveling to Chile asked me if Chile had recovered its democracy.   I told him it appears to me that it will be a century or more before that occurs, if ever.   That’s because Pinochet and The Chicago Boys wrote and passed a new Constitution which basically guarantees the wealth and power of the oligarchs and military and which requires a super legislative majority to change.  That is to say, majority-rule-democracy has been destroyed notwithstanding that elections were reinstated in 1990.   Today’s elected officials are pretty much powerless when it comes to restoring the economic well-being of the people of Chile while a few hundred oligarchs and the military are untouchable. In Chile a social security system that was similar to the US Social Security System–employee and employer contributions with defined benefit pay-outs–was privatized.  The employer contributions were ended.   Employees have wage withholdings paid to the government which turns the money over to, basically, hedge fund managers, who get to charge a management fee even while they manage the funds into oblivion.   There is no guaranteed benefit payout, except for the military which kept its employer contributions and defined benefits.  The military also has a constitutionally guaranteed 20% of the nationally-owned copper income as its own. In Chile, once nationally owned oil, gas and other minerals, have also been privatized.   These natural resources now belong to which ever oligarch owns the real estate under or upon which they are found. 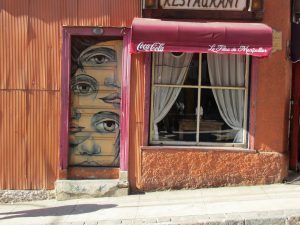 The government collects a regressive 19% sales tax from citizens whose tax funds are paid to private corporations to provide health care and education.   Ditto for building and maintaining highways.  (There are quite well-built and maintained, 4-lane highways, but they are private toll roads.    For those who can’t afford the tolls–who are many since the “minimum wage is $400/month, not measured by the hour–there are roads off to the sides of the highways which are crumbling and cluttered with trash.)  The work week is 45 hours, and 3 of 4 workers live below the poverty line. There are three currencies in Chile, the peso for minor purchases and its value oscillates against the US dollar (second reference currency), and the UF (unidad de fomento) for larger purchases like houses, etc. This last one is inflation indexed and therefore has a set increase/decrease set by the local Internal Revenue Service (see…http://www.sii.cl/pagina/valores/uf/uf2016.htm). As far as our guide knew, no other country has this currency system. In Chile unions have been all but eliminated. My take is that Chile is a political and economic disaster that has US right wingers/neo-cons salivating as they plot how to inflict such economic misery on Norte Americanos.    US citizens need to listen up.

Notwithstanding  this heartbreaking political and economic mess, the Chilean people we met, especially our local guides and speakers, were delightful as well as knowledgeable.   We learned about the wine industry.   I was impressed with a wine cooperative of small growers (people with 1 to 10 acres).   We visited the memorial to the disappeared and the Londres 38 House in a Santiago residential neighborhood that was used as a torture center.   We heard from two members of the Mapuche Native Tribe which has been subjected to genocidal and land-theft atrocities similar to those inflicted on Native Americans and which is struggling to survive and to regain lost lands.   We met with Sergio Urrutia who started out studying to be a priest and ended up in Salvadore Allende’s government and ultimately tortured in an island prison with Salvador Allende’s cabinet at Dawson Island in the cold south of Chile.  (It sounds much like being sent to a gulag in Siberia.)  We visited Pablo Neruda’s house in Santiago and his house by the sea in Isla Negra.   I knew that Neruda was a friend and supporter of Allende, but I was not aware that he died just days after Allende’s government was bombed out of existence. 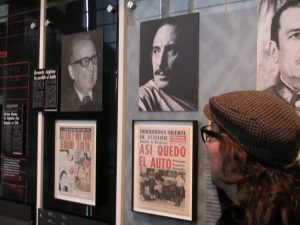 The fact that there are memorials to the tortured and disappeared and that all of the people with whom we met seemed unafraid to talk about the past and present problems, suggests that violent suppression of open speech is a thing of the past, perhaps because the economic privileges of the oligarchs and military have been guaranteed by the Constitution.   After all, the coup was all about money, and the money arrangements have been secured to their satisfaction, so maybe their attitude is: let ’em talk. As always, the people who live in Chile are warm, welcoming, bright, and engaged.  Seems to me that solidarity is one of the most important values that could be and should be taught, encouraged, and protected the world over instead of rugged individualism which tends to work for the 1%ers to the detriment of the remaining 99%. Great GX trip.