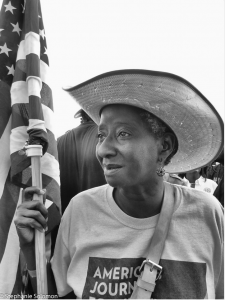 In March 2015 Global Exchange Reality Tours offered a “Civil Rights Celebration tour of Activism in Alabama.” Photographer and activist Stephanie Solomon participated in the tour, and has just released a stunning video of
the March 2015 gathering of activists in Selma, Alabama for the 50th Anniversary Commemoration of Bloody Sunday and the 1965 Voting Rights Act. Stephanie also presents photos from later in 2015, when she joined the last legs of America’s Journey for Justice and lobbied Congress with the NAACP, to propose Congressional bills about these and other issues.

The video is available on YouTube here. Stephanie’s website, Foot Soldiers for Justice, contains more information and background on the project. 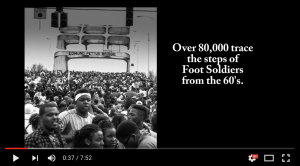 Stephanie says, “The aims of the project are many. First, to honor the Foot Soldiers from ‘back in the day’ and those of today. My hope is also that the images serve to archive both the 50th Anniversary and the Journey for Justice. These were two peaceful, historic moments amidst the violence and turmoil that have marked recent years in the US. I am particularly interested in using the images to support persons, organizations, and movements promoting social justice, and especially those involved in voting issues. Finally, may the project 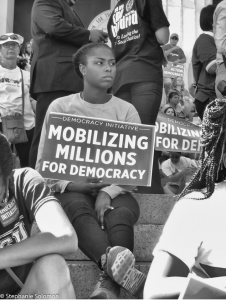 inspire future Foot Soldiers. There is still much to overcome.”

In this election year, with so much at stake and voter suppression rampant, the video and these photographs can provide valuable tools for education and mobilization.  A complete portfolio of the project Foot Soldiers for Justice is available upon request for appropriate venues, exhibition, and for print and online media.  Contact Stephanie at her website, http://footsoldiersforjustice.com

Meanwhile, please look at the video and distribute it far and wide!