The Caravan for Peace, Life and Justice Demands End to Drug War in New York City

More than a hundred people, from seven nations, with one message: End the War on Drugs. 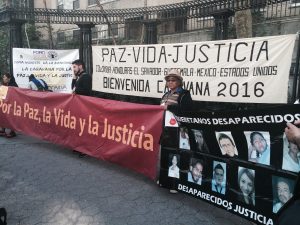 Neil Franklin for Law Enforcement Against Prohibition (LEAP) told the  crowd that “a growing number of police, federal agents and judges are coming out against prohibition and as a former police officer called for “no more drug war!”.From there the caravan joined Moms United in front of the United Nations. Maricela Orozco, a Mexican mother whose son Gerson was kidnapped and disappeared and whose 15-year old son Alan was shot to death when he tried to find his brother, spoke with pain and rage about the human toll of the drug war in Mexico. Mothers from the United States and England also told of losing their children to accidental overdoses caused by an unregulated market, stigmas that prevent the help young people need, families torn apart by jail time for minor drug offences and the other costs of the war. Despite the differences, the  shared experience as bereaved mothers and the common conviction that their suffering could have been prevented with reasonable drug policies.

The day ended with an event in the historic Abyssinian Baptist Church in Harlem. Following an invocation by Caravan member and Mayan religious leader Vitalino Similox, the Salvadoran Bishop Martin Barahona made a powerful speech against the war on drugs and the violence in his country, calling for regulation, dialogue and compassion. Another caravan member, Miriam Miranda of OFRANEH in Honduras held the audience spellbound as she spoke of her indigenous lands invaded by drug traffickers and corrupt security forces, and demanded demilitarization and traditional forms of resistance. 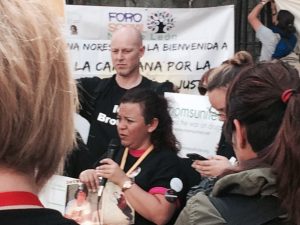 Rev. William Barber of New York City spoke forcefully of the imposition of the war on drugs  and the flooding of black communities with dangerous drugs, followed by mass incarceration. “It was really a war against the Black Panthers, against activists of all kinds,” he told the congregation. “It was an unjust war in order to stop a just revolution.” Amid cries of “Amen” from a crowd on its feet, the speakers cited the powerful economic forces behind the drug war, from the prison-industrial complex to the narcopoliticians and generals who benefit from prohibition and called for uniting opposition to end the drug war. The diversity that came out of sharing experiences ended up underlining the common suffering and common cause of the people from El Salvador, Guatemala, Honduras, Mexico up to the heart of Harlem.