Caravan Helps Reunite a Mother with her Children

Myrna Lazcano had made one of the most difficult decisions of her life. In 2013 Myrna was deported and separated from her two young daughters, both born in the United States. Desperate to be with her girls, she decided to cross the border in Laredo and deliver herself up to immigration authorities. Hers would become a landmark case in the right of mothers to raise their families in a safe and united family unit. 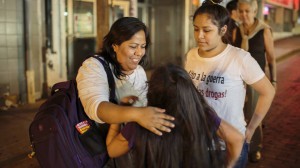 It was a tough decision because Myrna could be facing months in detention while waiting for a judge to review her case. But, in her words, “that was better than staying in Mexico feeling that I didn’t do enough”. So, she joined the Caravan for Peace, Life and Justice on its way to the border and in Nuevo Laredo, Tamaulipas, her daughters embraced their mother for the first time in what seemed like ages. The three walked together to the border line where Myrna was taken into a separate room. After 30 minutes, an immigration officer notified the caravan that she would be released and allowed to travel home to the US immediately. 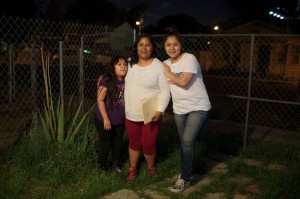 This unusually humane decision creates a new precedent that will allow other mothers without a criminal record who have been separated from their children by deportation to be allowed back in the US to fight their case. Myrna Lazcano thanked the Caravan for Peace, Life and Justice, and her advocates noted that arriving at the border with scores of Caravan members behind her was a key factor in her release. This extraordinary event showed the strength in collective organizing. As a result of these efforts, a mother has been reunited with her family and can once again give her children the love and care they need, together, in their own home.