Caravan for Peace, Life and Justice Arrives to Mexico City for a Concert to End the Drug War 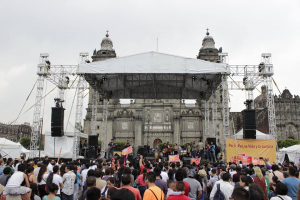 The 4-hour long event was buzzing with chants against the drug war as Caravan members gave powerful testimonies in between musical performances.

“We want to unveil policies that supposedly come off as a war on drugs, but are really an excuse to repress people,“ spoke Mexican Priest Alejandro Solalinde, who is known for his work in human rights and social justice movements involving migrants. “This is a really great moment to tell our government that we have had enough. It is time to unmask the ones who are really profiting off drugs and the illicit arms trade while they use this war as an excuse to repress immigrants and poor people.“

Next to him on stage stood Martin Barahona, Bishop Emeritus of the Anglican Episcopal Church of El Salvador and Vitalino Similox, Secretary General of the Ecumenical Christian Council of Guatemala, both of whom have been traveling with the Caravan and are prominent faith leaders in Central America speaking out against the war on drugs. 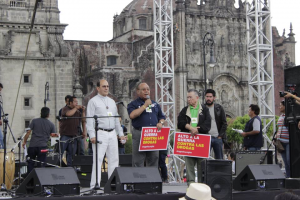 Other speakers included families of victims of the drug war who have been either murdered or disappeared and representatives from Colombia and Uruguay working in public health and drug policy reform. 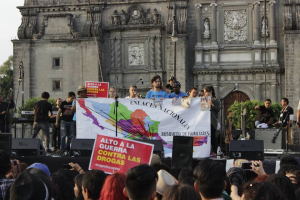 The Caravan for Peace, Life and Justice is a wide initiative made up of families of victims of human rights violations, civil society organizations and social movements from different countries demanding an end to the war on drugs.

The Caravan has been traveling through Honduras, El Salvador, Guatemala and Mexico y will arrive to New York with the goal of opening up spaces for dialogue among communities most affected by this war. It also seeks to compile experiences and testimonies regarding the series of brutal human rights violations committed under the name of the drug war with the purpose of making them visible at the United Nations General Assembly Special Session (UNGASS) on drugs taking place April 19-21.