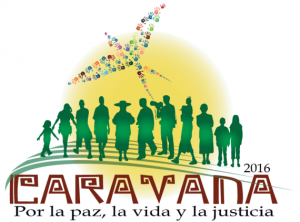 Friday, April 1, 2016 we (the 33 people traveling from Honduras to New York City on the Caravan for Peace, Life and Justice) awoke in a pine forest.

The night before, the Caravan decided to stay at an ecotourism center, a cluster of cabins about an hour out of La Esperanza called EcoSol. Many human rights and popular education workshops have been held here, and activists seeking respite from the constant pressure—and threats—of defending rights and territory in Honduras have found a place to breathe freely here, even if just for a few days.

We were grateful for the space–and the Internet–and caught up with tasks of internal organization, multimedia production and spreading the word about the now 3-day old Caravan.

There are 33 of us now. The caravan has gained strength along its path. After breakfast, we set off for Utopia, the COPINH’s (Council of Popular and Indigenous Organizations of Honduras) cultural center outside La Esperanza. 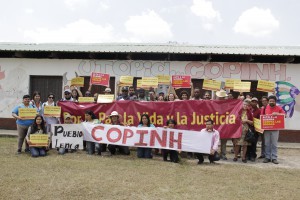 COPINH leaders received us–Tomás Gómez, Lilian Pérez, Marleny Reyes, Sotelo Chavarria, Gaspar Sánchez and Selvi Milla among them, later joined by Berta’s daughter Laura Zúniga Cáceres. Years of experience, training and knowledge-building are reflected in this group, even in the younger ones. Also a different kind of leadership that consciously creates room for new people and new ideas. A feminist, anti-capitalist, anti-imperialist, environmentalist leadership that refuses to be reduced to just one of those terms.

After we eat—mounds of beans and rice, thick tortillas and fried bananas, we enter the meeting room where we form a close circle around an altar to Berta. The photo that has spread across the globe, of her sitting on a rock beside the river, smiling and half-turned toward the camera, is poised in the center of the circle of colored candles, multi-hued corn, leaves and seeds. The room fills with the smoke of natural incense, as people from the caravan and the organization file in. 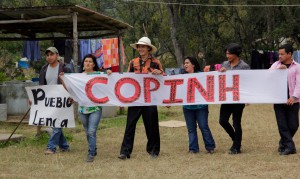 Gaspar Sanchez, director of sexual diversity in the leadership of COPINH, begins. Later in the day he’ll explain that COPINH is possibly the only national indigenous organization with a commission devoted to sexual diversity. Although the work’s still getting off the ground—mostly because the attacks on Lenca land and resources have intensified, he explains–the recognition that gays and lesbians exist in indigenous communities, that they have rights, that the discrimination they face is double or triple, has been a huge advance for the organization and its LGBTQ members.

It is another sign that the political and economic elites behind the assassination of Berta Caceres knew exactly what they were doing. COPINH is a model for the power of resistance when it is inclusive, spiritual, cultural, and integral.

“The war on drugs in Honduras is an excuse to eliminate us”, Gaspar states. Chavarría relates the history of COPINH, beginning with its founding in 1993 “to confront the destruction of the environment”. The organization now works in 6 departments, demanding the right of indigenous communities to consultation under Convention 169 of the International Labor Organization, recuperating ancestral lands, and facing off with powerful transnational companies to block megaprojects on indigenous lands.

Lilian Pérez notes that last year the organization achieved its dream of having a Casa de la Mujer, a women’s house. Here women from the communities receive leadership training with a different concept of leadership, gender equality, health and education workshops, etc. 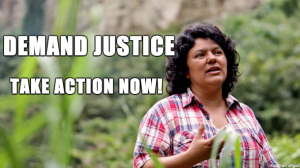 While the murder of Berta has been a terrible blow to the work, Lilian says they always had a pact– “that whether she’s here or not here, COPINH will continue forward… We’ll be many Bertas”.

Tomás Gómez, COPINH’s interim coordinator, emphasizes the importance of developing their own forms of autonomous and independent communication. The Honduran press is controlled by handful of families and frequently vilifies the COPINH and its actions. The organization has a network of five community radios.

Gómez explains that the spiritual aspect of the struggle reinforces identity and the strength to move forward collectively. La Pascualita, en elderly Lenca woman who conserved traditional ways even as the rest of the group lost the language and customs, now serves as the spiritual guide to the organization and a pillar of the effort to recover ancestral ways.

As the night winds down, we ask how they’ve come as far as they have, recovering ancestral lands, blocking the designs of powerful companies, overcoming repression, moving toward gender equality and uniting communities and the answer is the combination of the spiritual connection to the land, the development of autonomous media and productive projects, participatory democratic leadership and unity.

All these will be put to the test in this new phase of the organization after Berta’s death. But amid the laughter and the tears, the firm step of the leadership and the strong base and convictions of the organization–built through years of careful guidance–assure that the transition will be solid. The role of international solidarity, they emphasized, will be especially crucial in the months to come.