This content was originally published by Telesur under the following address: http://bit.ly/1op4Jva. Global Exchange has translated the article into English. Translated by Laura Krasovitzky 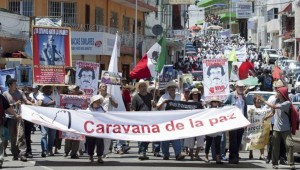 Human rights defenders and victims along with religious leaders are participating in a caravan that seeks to compile testimonies that can be heard at the U.N. Special Session on drugs taking place on April 19. With the goal of raising awareness on the negative effects of prohibitionist drug policies around the world, the caravan will be traveling through Honduras, El Salvador, Guatemala and Mexico before culminating at the U.N. headquarters in New York.

The initiative began this past Monday and is being led by human rights defenders, religious leaders and victims of human rights violations who seek to open spaces for dialogue. During the U.N. special session, heads of state will address the issue of national drug policies and the future frameworks for regulation of these narcotics.

The civic organizations that make up this caravan have criticized the rol the United States has played in relation to drugs and drug trafficking. According to Human Rights Director of Global Exchange Ted Lewis, “The United States has played a key role in promoting these prohibitionist policies around the world, especially Latin America. Here we have a new series of laws that are being implemented with racist biases in criminal justice reform and in Latin America this has manifested in the way of interventions and violence against its own people,“ said the director.

In light of these views and the thousands of victims, especially in countries represented by the Caravan, the Friedrich Ebert Foundation and Honduran human rights organizations have endorsed the initiative and marked that the Caravan for Peace, Life and Justice is expected to arrive one day before the U.N. special session.