How has the war on drugs impacted you? Tell Your Story 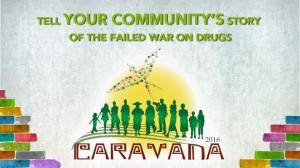 In just two months the Global Exchange Caravan for Peace, Life, and Justice will start a month-long, five-nation journey north from Honduras to New York City, arriving at the United Nations General Assembly Special Session on the World Drug Problem on April 19th.

The Caravan aims to give voice to victims of the failed war on drugs and raise the call for drug policy reform that prioritizes health, harm reduction, and human rights.

The drug war is a failure and we all know it, but the stories of why and how it will end are just beginning to be told.

That is why we are launching an international video contest. We want to hear your story!

We invite you to create a 1-3 minute original video on the drug war’s impact in your community and what people are (or aren’t) doing about it. Convey to an international audience the urgency for action to end the drug war tragedy.

The creators of the top 3 videos will win great prizes:

To Participate: Upload your video to YouTube and send us the link at caravana2016@gmail.com by March 1, 2016.

Your story will be part of the growing movement to end the war on drugs!!

Making the cost of the drug war visible, encouraging debate and demanding compassionate change are at the heart of the “Caravan for Peace, Life, and Justice.”  Join us in building a powerful movement to Stop the Harm and ensure Peace, Life and Justice for all.

Learn more about the contest here and the upcoming Caravan: peacelifejustice.org/concurso/