The TPP Goes to Congress 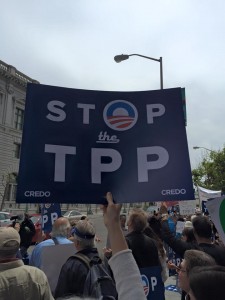 A Congressional vote looms on the TPP, the largest trade deal in history.

Over the weekend negotiators from the U.S. and eleven other countries, representing 40% of the global economy, formally agreed on a trade deal that is bad news for working families, small farmers, and the environment – in the U.S. and around the world.

Now, this terrible deal will go to Congress where the Obama Administration plans to make common cause with big-business Republicans to turn it into law over the objection of majorities of Americans and his own Democratic Party.

Bernie Sanders, the Vermont Senator and Presidential candidate, who has pledged to join Congressional opposition to the agreement, says that the TPP deal is evidence that, “Wall Street and other big corporations have won again…We need trade policies that benefit American workers and consumers, not just the CEOs of large multinational corporations.”

Global Exchange has consistently opposed unfair trade deals and we need your help to defeat this one. Say no to the TPP!

P.S. If you are in the Sacramento area, come out on October 14 at 11am to take action for “No More Climate Busting Trade Deals.” 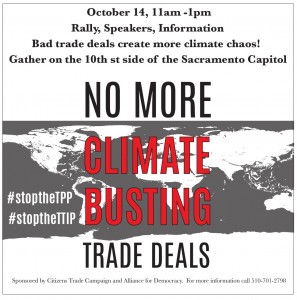