Rick Tejada-Flores is a documentary filmmaker and former member of the Global Exchange board of directors. His many works for PBS include The Fight in the Fields, Cesar Chavez and the Farmworkers Struggle; Race is the Place; The Good War and Those who Refused to Fight it, and Orozco, Man of Fire. He is currently in the midst of a crowdfunding campaign for his newest film, My Bolivia, Remembering What I Never Knew, to raise the funds to finish it. To learn more about the film and contribute, go to: http://www.beaconreader.com/projects/my-bolivia-remembering-what-i-never-knew. 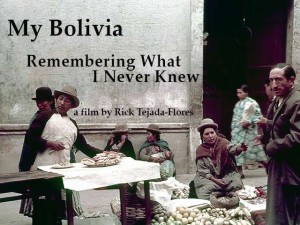 When people ask me where I come from, I say Southern California.  That’s where I grew up, but my father came here from Bolivia to study at Cal Tech.  He wasn’t an undocumented worker — he came from a wealthy family. When I was little I heard about the family estates, and about my grandfather, who was President of Bolivia from 1934 to1936. (Of course, in the 190 years since Bolivian Independence in 1825 it has had 80 presidents. The fact that Evo Morales is the first Indian President in the country’s history is remarkable, but the fact that he has been president for almost 10 years is really amazing!)

My father never took us back to Bolivia, in fact he hardly talked about Bolivia at all. Finally I decided to see for myself. When I did, I found a remarkable story; and since I’m a filmmaker, that was the starting point for my film My Bolivia, Remembering What I Never Knew.  The more I learned, the more I felt that my family’s story might serve as a sort of paradigm; a way of understanding some of the basic forces that have shaped the continent’s history.  Here are some of the themes that have emerged as I uncovered the family story.

The Fragile Nature of Democratic Institutions 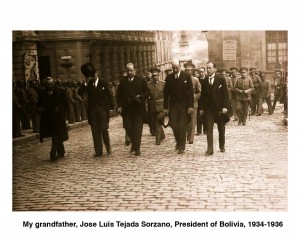 When you hear that your grandfather was president, you plug in what that term represents here…  convoluted elections, immense power, the desire to achieve consensus, etc.  My grandfather was elected Vice President in the elections of 1931, and became President after a military coup in 1934 (some have suggested that he engineered the coup but I think that is very unlikely). When I took a look at the 1931 Bolivian elections here is what I found. Bolivia had a population of approximately 2 ½ million then, the vast majority Indians.  In the presidential elections that year, a total of 39,000 votes were cast.  Indians and women were not allowed to vote, and white males could vote if they met property-owning or professional standards. Of course, the only alternative to what they called democracy then was military rule.  It was always pretty vague about how my grandfather started as Vice President and ended up as President.  What happened was that there was a coup in the middle of the war. It looks like the army coup leaders were hoping for the appearance of legitimacy in elevating my grandfather to the Presidency.  And that was the pattern from then on.  My grandfather was ousted in another coup in 1936.

Slavery in the Hemispheric Context

Most Americans think that African slavery was a particularly North American institution. But of the roughly 10 million Africans brought to the New World, less than 500,000 came to North America; the rest to the Caribbean, Central and Latin America.  Although Bolivia is a primarily an Indian country, my family and many others owned slaves in the colonial period. The slaves had been brought to Bolivia to work in the mines in Potosi, but when they couldn’t stand the altitude and cold, they were brought down to the sub-tropical areas to work on the large estates. Their descendants still live in the same region, but now they speak Aymara as well as Spanish, wear traditional Bolivian garb. Afro Bolivians remain at the bottom of Bolivian society.  In fact, they are practically invisible, and race in Bolivia is a defined as relations between white people and Indians.

A War for Oil or to Disract?

Bolivia and Paraguay fought a war in the Chaco dessert between the two countries from 1932 to 1935. It was the bloodiest war in Latin American history.  Best figures are 60,000 Bolivians and 20,000 Paraguayans died.  In a majority Indian country like Bolivia this means that most of the casualties were Indian. 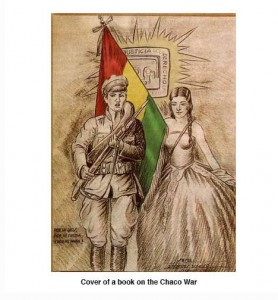 The Chaco region was and still is virtually uninhabited, with no natural resources. Both Standard Oil and Shell had been prospecting in the region, so the popular belief was that the war was fought to control the oil that was thought to be there.  This is certainly a theme that has echoed in other areas, particularly Iraq.  The irony is that after the war, there was no oil to be found.

I believe that a more plausible explanation for the conflict was the classic one of using war to distract people from domestic problems.  Bolivia, an extremely poor country, was also suffering from the devastating effects of the Great Depression.

However, there was an important result of the meaningless war.  The generation that fought, known as the Chaco generation, formed the nucleus of the movement that finally led the revolution of 1952 that overturned the old order, initiated land reform and universal suffrage and nationalized the mines. I was amazed to find out that another family member, whose name has been written out of family history, was in the leadership of the revolution and administered the land reform that stripped our family of its estates.

All of these issues are explored in my film; My Bolivia, Remembering what I Never Knew. I am in in the middle of a crowd funding campaign to raise the funds to finish it.  To learn more about the film and contribute, go to http://www.beaconreader.com/projects/my-bolivia-remembering-what-i-never-knew. All contributions will be matched on a dollar for dollar basis up to $15,000.