One Big Step in US-Cuba Relations, More Steps to be Made 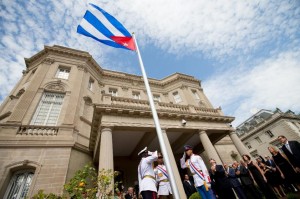 54 years ago, the Cuban flag flying above the Cuban embassy in Washington D.C. was abruptly taken down, as the United States cut official ties with Cuba approaching the height of the Cold War. For the next half century the flag remained that way, and a relationship of isolation and hostility prevailed between the two neighboring countries.

Today, July 20th, 2015, the Cuban flag is once again flying above that embassy building in Washington D.C. after being hoisted in a dramatic morning ceremony symbolizing the restoration of U.S.-Cuban diplomatic relations for the first time since 1961.

It’s a momentous day, especially for those like Global Exchange who have been working to restore ties between the U.S. and Cuba for the past few decades. Without a doubt, it is a major milestone in de-thawing a relationship that has remained frozen far too long past the end of the Cold War.

But while a welcome announcement, and certainly cause for celebration, we should remember that it’s just the first step towards normalization, as the restoration of official diplomatic ties in no way means that relations are now normal. Indeed, the economic blockade imposed by the United States against Cuba in 1962 remains firmly in place, and requires several difficult hurdles to be overcome in Congress in order to be lifted. Meanwhile, the blockade continues to cost Cuba (and the U.S.) billions of dollars annually, and remains the single largest obstacle to mended US-Cuba relations.

Also important is the return of the Guantanamo Naval Base to Cuba, its rightful owner, as well as an end to USAID-funded regime change programs that are still in place. Washington should also immediately lift the senseless restrictions on travel to Cuba by U.S. citizens and residents.

There is still a long road ahead to mending the US-Cuba relationship. While restoring diplomatic relations is a start, issues like the blockade, travel ban and Guantanamo still require our vigilant attention and may take much more time to overcome. But for now, let’s celebrate the importance of today’s step, while keeping an eye on the many more steps that still need to be made.

Click here for more information on traveling to Cuba with Global Exchange!