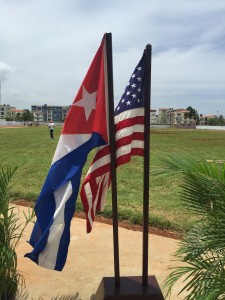 Last week, the United States and Cuba formally announced they will restore full diplomatic relations and re-open embassies in Havana and Washington respectively on July 20th. Without a doubt, it is a momentous milestone in de-thawing a relationship that has remained frozen far too long past the end of the Cold War.

While a welcome announcement, it is also long overdue, and there still remains much to be done to end to the economic blockade and travel restrictions that continue to harm both Cuba and the United States.

Just a week prior to this historic announcement of re-opening embassies, Global Exchange sent Princeton University’s track and field team on an 8-day trip to Cuba that included stops in Havana, Mantanzas, Varadero and Santa Clara, as well as two international competitions with Cuban teams. In addition to the track meets, the itinerary included a meeting at ICAP (Instituto Cubano de Amistad con los Pueblos – “The Cuban Institute for Friendship with the Peoples”) for a discussion on US-Cuba relations, a CDR block party with a local neighborhood, and visits to various organizations, community leaders and artists. 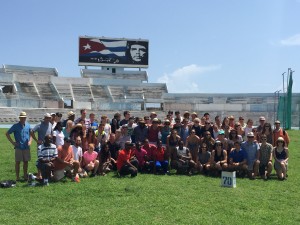 Princeton Track and Field at Estadio Panamericano, site of the 1991 Pan American Games

I was lucky enough to go along with the Princeton group for this trip, my first such trip to Cuba. Having traveled quite a bit through other Latin American countries, nothing could really prepare me for the reality of Cuba. While holding a lot of similarities to other Latin American countries, there are also many other aspects of Cuba that simply cannot be compared. Cuba is distinctly Cuba, largely because of its history. For example, its music and dance may bear resemblance to other parts of Latin America, but its 1955 Chevys and large Soviet-style public squares certainly do not.

While traversing the Cuban countryside, walking the narrow streets of Old Havana and mingling with Cubans of many walks of life, I continually reminded myself and others that we were experiencing truly historic times. It was, and still is, very recent that Presidents Obama and Castro dramatically announced that the U.S. and Cuba would be taking steps to normalizing relations, something that has not existed since 1961 when formal ties were abruptly cut approaching the height of the Cold War. And it was only a few months ago, in April, that Presidents Obama and Castro met for the first formal talks between the two countries’ leaders in more than half a century. While we were on Cuban soil we were witnessing, living and breathing history. We will look back at this period of time 30, 40, 50 years from now as nothing short of groundbreaking, and for those of us on the trip, we can say that we were there.

The Cubans we talked with knew this for sure. Almost everyone we spoke with on our trip mentioned the thaw, young and old. It is so clearly on the forefront of Cuban consciousness. And it is certainly now on the mind of many Princeton student-athletes, as it should be for Americans in general. To better understand US-Cuba relations is to better understand US-Latin America relations as a whole, both of present day and the past half century. 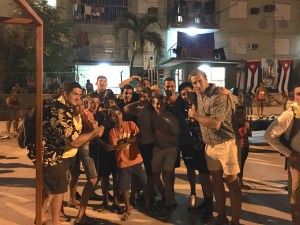 A highlight of the trip was watching the intermingling of students and students, coaches and coaches, athletes and athletes. Broken Spanish and English was attempted, and many smiles, handshakes, high fives and hugs were exchanged. It epitomized the essence of a People-to-People exchange and Citizen Diplomacy – the idea that, even if our governments haven’t always liked or talked with each other, that doesn’t mean the people cannot.

I also continually reminded myself, and others, that Cuba has the potential to change more in the next 5-10 years than it has in the previous half-century. The changes that will come to the island, as a result of not just normalized diplomatic relations but an eventual end to the economic blockade and travel restrictions imposed by the U.S. government, are sure to be swift and transformative. The changes are yet to be fully seen, and it’s hard to tell how things will unfold. But to be sure, an eventual lifting of the blockade and travel restrictions will bring major changes to the island. Time will tell what those changes will look like. But for now, it’s important to realize that anyone traveling to Cuba during this historic time will be witnessing a Cuba that may not exist as it currently does a decade from now.

We knew more news regarding US-Cuba relations would be coming soon, but little did we know that it would be just one week after our return to the States that the embassy openings would be formally announced, nor that it would be just three more weeks from then that the U.S. embassy would actually open in Havana, the first time one has officially operated in Cuba since 1961.

There is still a long road ahead to mending the US-Cuba relationship. While restoring diplomatic relations is a start, the economic blockade and travel ban still face tough hurdles in Congress that may take much more time to overcome. But nonetheless, we are experiencing historic times in US-Cuba relations. Luckily for the Princeton track and field team, and myself, we were able to witness some of these changes in person, walking (and running) the very ground that Che Guevara traversed, while the present day attempts to mend the divisions and hostility of the past.

Click here for more information on opportunities to travel with Global Exchange to Cuba! 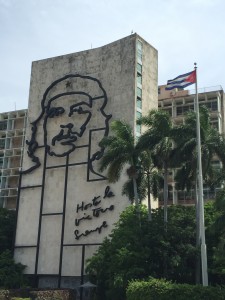