Reflections from a Reality Tour to Argentina

The following was written by Anne Kass, who traveled with Global Exchange on a Reality Tour to Argentina, March 22 – April 1, 2015.

We arrived in Buenos Aires on Sunday, March 22 and since then we have been experiencing first-hand the subject of Naomi Klein’s film, The Take, with the help of a wonderful Global Exchange guide, Delia Marx. 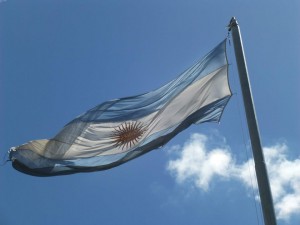 For starters, we have been staying in the B.A.U.E.N. Hotel, a recuperated business. It used to be just the “BAUEN Hotel” but the original owner, who built the place in 1978 for a Soccer World Cup extravaganza, with a government loan, of course, insisted the workers who took over the place in 2003, when he bankrupted the hotel without paying the government loan and without paying the employees, could not use the BAUEN trade name. They turned it into an acronym after they were told in court one day in 2003 that they were SOL because there just was no money to pay their claims. They had nothing else to do–no jobs, no possibility of jobs–so they decided to sneak in the side door and occupy the hotel. There were 17 of them at that time, and there are 130 of them now. I can’t imagine how 130 people manage to run an 18-story hotel and restaurant, but they do a fine job.

Anyway, it is an 18-story hotel in the middle of Buenos Aires — great location. The employees who took it over discovered that it had been built of pretty shoddy materials. They got the help from university students–engineers who determined what structural problems needed urgent attention, business students who helped them develop management skills, and psychologists who taught them how to make cooperative decisions. The hotel is in remarkably good condition after 12 years being operated by people with limited capital for maintenance. Clearly, the workers have much experience and hands-on knowledge of how to keep things working. The 130 employees all receive the same base pay, and those who serve on management committee receive a bit more, plus each employee receives a bit more for each child he/she has. Staying here has been a highlight of this Argentina experience.

The employees are living under an eviction court order, but the political cost of executing the order would be high. The hotel is one of 300 recuperated businesses. The employee who talked with us said that the hotel is not the most important one, but it is the most visible one and one the right wing would like to go away because it is such a strong example. There are elections to occur in October and the right wing seems to have figured out how to organize and so they apparently stand a chance of winning. Their hope is that the hotel will be nationalized with the nation providing the capital to refurbish it and continuing their cooperative as the workers. There are several bills pending before the legislature to do that. I wish them every success.

The story of the BAUEN is impressive, hopeful and fragile.  I’m delighted to have been able to stay here.

As I am writing this, my husband Bill is on the street following some drummers who are leading a general strike which pretty much will shut down the city today. I sense that Argentinians, or at least Buenos Aires residents, have a strong tradition of marching in big, and I mean big, groups and taking over major streets here. Last week we attended a march to commemorate the 1978 coup. It was the biggest crowd I’ve ever been in. It’s almost hard to imagine a military coup happening here, but our guide tells us that Argentinians have learned–and continuously remind themselves–that they do not want to re-experience military dictatorships, disappearings, or neo-liberalism. 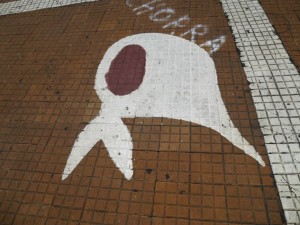 Two groups that deserve a lot of credit for this tradition of marching are the “Mothers” and “Grandmothers” who organized to demand information about their disappeared sons and daughters–and the grandmothers who demanded information about their kidnapped grandchildren who were taken from pregnant kidnapees/torture victims before they were killed and given to military families rather like they were puppies.  These women started marching weekly in front of the government house in 1978, when it was seriously dangerous to do so. Actually, they went to the main political square to sit and protest. They were told they could not meet there, so they started walking, single file, around a fountain, and they continue today. We attended their march this week and the ladies can barely walk these days, but they do so.  So far 116 grandchildren have been found using DNA analysis.

Yesterday–Monday–we visited a huge park dedicated to reminding people about the last, hopefully, dictatorship 1978-1986 and the 30,000 who were disappeared during that time. It is a graceful and moving tribute with a wall of names that is similar to the US Viet Nam wall. The big difference, however, is that in this park they don’t just remember the dead, they remember the perpetrators–which includes the School of the Americas and the CIA as well as their own leaders and people. I kept thinking that in the US there is no instance, never mind tradition, of reminding ourselves about moments of national shame. Indeed, every time some US leader suggests apologizing for some egregious past conduct–even slavery and Native American genocide– the right-wing goes nuts. I think acknowledging errors and institutional memory about them are necessary for genuine growth, healing and change to occur. As of now, I think the US is stuck in a cycle of repetition of shameful conduct–the many coups  aided and abetted, if not out and out conducted around the world–always in denial. 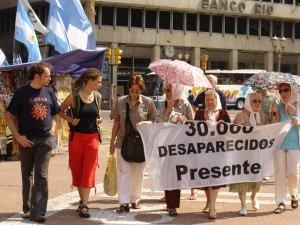 We have met with a journalist who runs a cooperative coffee shop and magazine called MU. We met with an “alternative” economist–educated at The American University in DC no less–meaning an economist who thinks capitalism is not good for living things.  He is now a university professor. He noted that mainstream economics in the US is dogmatic, based on fantasy beliefs–markets are competitive, consumers act in their own best interests, (he mentioned the myth and false metaphor US citizens are constantly told that a national budget is like a family budget where you can only spend what you take in) and that studying mainstream economics in the US is like studying canon law in the Vatican. Does God exist is not open for discussion.

In the rest of the world, the economists talk about “post neo-liberalism,” a term I doubt many United States citizens would even recognize. In Argentina–and Venezuela, and Cuba, and Bolivia, people on the street know well what it means–redistribution of wealth upward. We’ve eaten in several “recuperated” restaurants where workers were stiffed for wages when owners filed bankruptcy and who, like our hotel workers, occupied their restaurants and now run them themselves. We met with an organic agriculturalist who says they use the term “agricological” rather than organic because organic refers to something certified by a private business–a brand-name- and they do not want to cede any of their process to such a business entity.

We met with a couple who sold their business and home in Buenos Aires to buy land about an hour away, where they’ve built a foster home in which 15 boys at a time, who’ve been involved with the legal system, go to live to learn about raising organic vegetables, free range animals and how to cook and run an organic restaurant–impressive. We met with a cooperative print shop, another recuperated business and I think we will meet with another recuperated print shop today, assuming we can navigate the strikers to get there. The print shop workers had the building they are in “nationalized”–repossessed by the state for non-payment of government loans–and made available to them rent-free, for now.

The Kirchner governments, first Nestor, who died in 2007, then his wife–who had been a national Senator and politician in her own right–for the past 8 years, have been at least benign to the occupy efforts. There is some concern that a right-wing government might be elected in October and the effect on the occupy movement is unclear.

We’re told the military has been seriously reduced in size and power since 1986, with budget cuts–what a notion. The top 5 or 7 military guys, rather like the US Joint Chiefs of Staff, were put on trial for the disappearings and found guilty. They were subsequently pardoned or given amnesty by President Menem–the guy before the Kirschners–who also made private debts of the banks public debt and privatized national institutions. Nestor Kirschner, who was elected president in 2004, undid the pardons and tried the generals for something like obstruction of justice, and now those who aren’t dead are in jail. Justice is better late than never, which is what we can expect in the US–never, that is, for the likes of Henry Kissinger, W, the guys who created the torture program and those who implemented it, and every CIA director since, probably, its birth.

We learned a bit about Juan Peron whose personal history is strikingly similar to Hugo Chavez–both born into rather poor, working families; both made it into the military somehow; both rose through military ranks quickly; both ran for office as populists– in Peron’s case he put in place important labor reforms–8 hour work day, for example. Peron was removed by a military coup, as was Chavez, and that’s where the similar paths end. Peron ran away to Spain and when he returned he pretended to be leftist while actually having become a right-winger. He seduced the youth into helping him get reelected, then arranged for many of them to be disappeared so his “legacy” is ambiguous. I think many of those we talked with see his disappearings in the 1970s as having erased his labor reforms of the 1950s.

As you can tell, I think this was one more great Global Exchange Reality Tour and our guide, Delia Marx, was a 10 out of 10.