In 1990, the first Global Exchange Reality Tour to Cuba stood on the top floor of the historic Hotel Presidente in Havana, sharing experiences of the last ten days and overloading our Cuban guides and friends with last minute questions and, frankly, wishing that we didn’t have to leave. 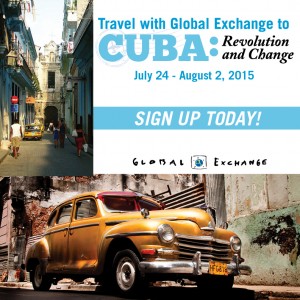 Twenty-four years later, the dramatic announcement in December by President Barack Obama and President Raul Castro that they had embarked on negotiations for a new relationship between our two nations stirred hope among people in both countries for fully normalized relations.

I think back to that night in the Hotel Presidente and I celebrate the history, though sometimes hard, that has gotten us to this place.

Since 1990 Global Exchange has taken hundreds of Reality Tours and thousands of American citizens to Cuba. We have been part of a movement seeking to learn about Cuba, normalize U.S. relations with the island, and end the onerous embargo (or bloqueo, as it’s called by the Cubans) of more than 50 years.

By retuning time and time again to the island, we’ve forged a special relationship with the Cuban people. Indeed, nothing defines Global Exchange’s 27-year history quite like the Freedom to Travel campaign of the ‘90’s, when our passports and assets were seized; our subsequent diverse Reality Tours across the island, visiting organic farms, appreciating cultural icons and celebrating important historical milestones; the solidarity work throughout the world on behalf of Cuba; and the friendships that we have nurtured with Cubans from all walks of life that has enriched our understanding of justice.

The dramatic announcement by President Barack Obama and President Raul Castro in December 2014 that they had embarked on negotiations for a new relationship between our two nations stirred hope among people in both countries for fully normalized relations. 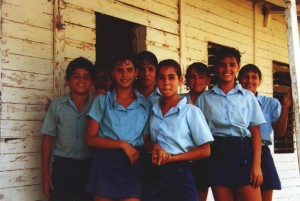 During a visit to Cuba earlier this year, I repeatedly heard Cuban friends express their excitement that normalization would give their country a new opportunity to show the world the beauty and accomplishments of Cuba and the Cuban revolution. My friends asked questions for hours about human rights in the United States, current affairs and emerging justice movements such as BlackLivesMatter, health care, immigration, and our country’s reactions to the presidential announcements…all rich conversations with friends and colleagues, with whom we can finally work more closely together.

Anyone who has ever been to Cuba with Global Exchange knows that the people of Cuba have more to offer the world than rum, cigars, and beaches. The Latin American School of Medicine, which offers a free education to low income and minority American students, is a shining example of Cuba’s commitment to international solidarity. We in the United States can benefit from the examples of sustainable development and innovative health technology the Cubans have modeled. We can learn from the spirit of Cuban internationalism as evidenced in Haiti, Venezuela, Pakistan, and South Africa. This is our opportunity to make the learning curve between our countries a “two-way” street.

We should be clear that substantive change in Cuba/U.S. relations will require the same type of sustained mobilization that brought about the joint announcements last year.

As President Obama said in his announcement, “Change is hard- in our own lives, and in the lives of nations. And change is even harder when we carry the heavy weight of history on our shoulders.”

When I sat and talked with Cuban officials during my last visit they noted that many steps needed to be taken to bring substance to this historic moment.

Normal relations between two countries means much more than the opening of embassies and presidential speeches. It should mean that American citizens and Cubans can travel freely back and forth across the 90 miles of the Caribbean that ‘separate’ us. It should mean that Cuba is removed from the U.S. list of countries accused of supporting terrorism.

And in the U.S. Congress there are Members doing all that they can to block the diplomatic pathways. This is the “weight of history” the president referred to in his remarks.

We need to accelerate global citizen diplomacy. The Cuba solidarity movement in the United States and around the world has been consistent and relentless for the last 50 years. And we are not stopping now.

Now is the time for U.S. citizens to insure that the next many years of Cuba/U.S. relations will benefit the people of both countries and be free from the Cold War ideology which clouded our mutual self interests.

Now is the time to tell your Member of Congress to end the embargo and support passage of the Freedom to Travel to Cuba Act.

Now is the time to join one of the upcoming Global Exchange Reality Tours to Cuba. If you are part of an educational institution, a union, a professional group or a bunch of friends who want to travel – contact Global Exchange about arranging a custom trip.

More than 25 years has passed since that first Global Exchange Reality Tour gathered at the Hotel Presidente to dream and strategize about a brighter and less conflicted future for both our countries.

Global Exchange is committed to ensuring that the presidential pledges of last year are genuine. Join us.