New Venezuela Sanctions – Are They Really About Human Rights?

Last week, the U.S. government slapped Venezuela with new sanctions in the name of human rights and “national security”. An executive order describing the sanctions claims the situation in the country poses an “unusual and extraordinary threat to the national security and foreign policy of the United States.”

To be sure, the claim that Venezuela poses an unusual and extraordinary threat to the national security of the United States is self-evidently quite absurd. As for human rights, to sanctimoniously issue sanctions from the  place of being the voice and promoter of human rights across the world is laughable to those who can see both its falsity and the glaring double standard applied.

Indeed, these sanctions in the name of “human rights” come in the face of billions of dollars of continued U.S. military aid and arms sales to repressive and authoritarian regimes such as Saudi Arabia, Egypt and Bahrain – all of whom hold ghastly records of human rights violations far worse than anything that occurs inside Venezuela, including systematic repression, torture, arbitrary detention and imprisonment, stifling of dissent, lack of basic civil liberties and even, in the case of Saudi Arabia, public floggings and beheadings perpetrated by the government on a regular basis. 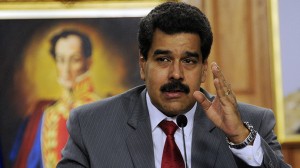 The hypocrisy and irony of our foreign policy shouldn’t surprise us anymore; indeed, it’s nothing new – throughout both the Cold War and the “War on Terror” we have consistently supplied friendly (i.e. capitalist and military friendly) but repressive regimes with guns, cash and support while any country remotely resembling an opposition to the neoliberal economic order was punished to the teeth. If you’re a capitalist-friendly dictator either with oil or a strategic area for military bases – and even better yet, both – human rights are but a minor side thought, perhaps mentioned and denounced, but rarely made to actually affect policy. If you’re a socialist government working against the hegemony of neoliberal capitalism, on the other hand, human rights accusations and ensuing punishments come straight to the fore.

The problem is that when we apply this double standard in our foreign policy we fracture the very essence of the values we claim to stand for, and slowly strip away any legitimacy, credibility and validity to our words abroad. The rhetoric our politicians so like to use in the halls of congress and the White House, espousing American exceptionalism, the dignities of freedom, spreading democracy and upholding human rights around the world become hollow and void of meaning. Because the reality is, we usually don’t care a thing for human rights in other countries if it’s against our economic interest to do so. Money and profit has always come first – people and human rights (and the environment) a distant second.

And it’s all wrapped and sold to the public in the fear-inducing guise of national security, in both the case of action against Venezuela and non-action towards countries like Saudi Arabia. But the irony is that it’s often this very corporate globalization and neoliberal order that has stoked so much resentment in many parts of the developing world and that has helped give fuel to the fire to those who actually would endanger the security of the United States. And the further irony is that in supplying repressive regimes in the Middle East with billions of dollars of taxpayer money and arms, we actually propagate the very extremism the money and arms are supposed to be combating. Because indeed, nothing works more in the favor of extremism in the long-term than repression and poverty. And when the global hegemon helps fund that repression, well, you’ve created a nice target for that anger.

President Obama has taken a historic step forward by attempting to begin normalizing relations with Cuba. Unfortunately, such behavior towards Venezuela is a major step backwards, and from a regional perspective shoots any improvement in U.S.-Latin America relations stemming from the Cuba developments in the foot.

All of this leads to the obvious conclusion: it’s not so much human rights violations that the U.S. government dislikes, as much as it’s anyone who opposes its economic order.