Some Words From Selma

Robert O’Sullivan is pastor of Bethlehem Lutheran Church in Berkeley, California. He came to Selma on a Global Exchange Reality Tour March 1-9, 2015 for the 50th anniversary of the Selma to Montgomery civil rights march and wrote this piece prior to the anniversary march. 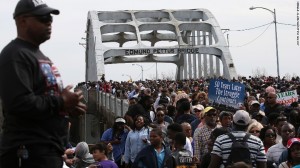 Thousands of people marched across the Edmund Pettus Bridge during the 50th anniversary of the Selma to Montgomery civil rights march. (Justin Sullivan/Getty Images)

It is anticipated that over 100,000 people are likely to converge on Selma, Alabama this weekend for the 50th anniversary Jubilee of events which shocked—and ultimately significantly changed—America. As one of those people, an ex-sexagenarian (I don’t like the sound of septuagenarian) from California, I thought I would share my perceptions as to why so many would venture to a small town where finding basic amenities— accommodations, transportation, bathrooms, food, parking, etc.—will be very challenging.

Some might be attracted to a media circus revolving around Presidents Obama and George W. Bush, over 130 members of Congress (primarily Democrats), many celebrities and a plethora of events (speeches, memorial services, forums, concerts, plays, lectures, films showings) which will make many wish for the gift of ubiquity.

But I would suggest that many will come for the reasons I am here: to celebrate, honor and learn more from the brave souls whose courage changed the world significantly and to be reenergized to continue in the struggle for justice and equality.

As a young white man in the 1960’s I participated in many ways in the civil rights struggle, including attending the March on Washington in 1963. I hoped by now that things would be much better. I certainly recognize many great advances, especially in the social sphere and attitudes, but I am keenly aware of how much farther we need to go. I taught high school in Oakland for over twenty years and know first hand how inequality and injustice are alive and well.

I also am aware of the ugliness of some police attitudes toward minorities. Oscar Grant (“Fruitvale Station”) I knew slightly as he was a butcher in a market where I often shopped. As someone who used to play a lot of basketball in the flatlands of Oakland, I also learned that driving with young black passengers often resulted in traffic stops with ticky-tacky justifications.

But many things changed due to Selma, because what at first were barely noticed efforts by local people who found it outrageous that only 240 blacks were registered to vote in a county where 15,000 lived escalated to marches with thousands from all over the country. They came because they were appalled by inequality maintained by terrorism, law enforcement violence and daily indignities. 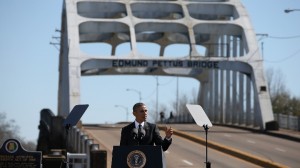 Who would have thought back then that the courageous martyrs and every day folk of the Selma crusades, led by inspired leaders committed to justice and non-violence, would change history in major ways?

Later events in the Philippines, South Africa, Tiananmen Square, Hong Kong and Eastern Europe all had roots in the events of the civil rights era, with Alabama struggles in Montgomery, Birmingham and Selma being three of the most important. And, although the progress has been mixed and set backs have been many, the number of African-Americans holding office from the Presidency to local positions would not have been possible without the Voting Rights Act.

I was surprised that George and Laura Bush were coming—perhaps it is his way of apologizing for how the Roberts-led Supreme Court has vitiated the Voting Rights Act, despite its being unanimously re-affirmed by both houses of Congress.

In my youthful involvement in the Movement, I anticipated more progress than has happened. It is sad to learn that Alabama schools, including Selma High School, are overwhelming African-American while white kids attend private, often “Christian” schools. Economic disparity increases throughout the land. Scarier still is the apathy of many youth, but I am hopeful that events this weekend in perhaps the world’s most famous small town will help energize many to fight the good fight.