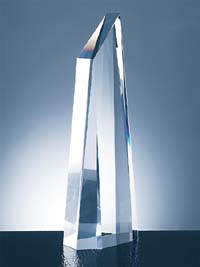 For more than ten years the Business Ethics Network Awards, the BENNY awards, have been given to recognize innovative and successful campaigns to make corporations more socially and environmentally responsible.

We’re proud to announce that this fall the “Raise the Bar Hershey’s campaign” has been awarded an Activist’s Choice award for 2014!

With our friends at Green America, the International Labor Rights Forum and activists, like you in schools, churches and community groups all around the country, we pushed Hershey’s to do the right thing. We focused on Hershey’s as the largest publicly traded chocolate company in the U.S. for its failure to address child labor in its supply chain. 1.8 million children are estimated to work in the cocoa industry in West Africa without the opportunity to go to school. Fair Trade is still the best way to assure that parents are paid a fair wage and can afford to send their children to school. Fair Trade is the only certification that allows the farmers to make their own decisions, for themselves and their communities, about how to spend the social premium.

Using tactics ranging from actions at movie theaters, protests at the flagship store in Time Square, NY, hosting “We want more from our S’mores” campfires, collecting manes for a petition, Valentine’s Day postcards sent to the company, as well as shareholder resolutions – we did it! In October 2012, Hershey’s agreed to adopt certification for its cocoa and use third party verification to assure that no child labor is used in the supply chain. 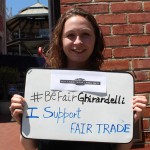 The long term impacts of this campaign are significant: with the top two chocolate companies in the United States certifying  cocoa (Mars, too) – other companies are now feeling the pressure to do the same.

Take action to support the campaign and keep the pressure up.