Featured, For Our Members, Freedom to Travel to Cuba, People to People Blog

Today’s historic announcement by the Presidents of the United States and Cuba that they intend to normalize diplomatic relations is cause for celebration on both sides of the Straits of Florida. Global Exchange applauds the two governments, their Canadian interlocutors, Pope Francis and all who played a role in bringing us to this important moment.

The agreement between the two governments—which broke normal diplomatic contact in 1961—provides an opportunity to begin a new chapter in U.S. / Cuba relations, based on dialogue and mutual respect. For the past fifty-plus years, the United States has pursued a thoroughly failed policy of political and economic hostility, a policy that has divided families and hurt ordinary Cubans. It is a policy that has been roundly condemned around the world and by business, cultural and government leaders here in the United States. This agreement to normalize diplomatic relations is long overdue. 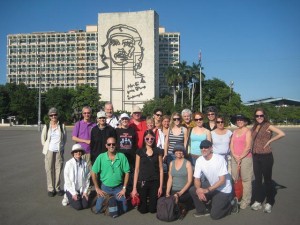 For the past 25 years, Global Exchange has encouraged people-to-people ties between Cubans and Americans by bringing hundreds of American delegations to the island. We have great hope for the future relationship between our two countries based in no small part on the friendships and partnerships these delegations have forged between Cubans and Americans and the common desire for peace and reconciliation they have revealed.

While today should be a day of celebration both in the United States and Cuba, there is still much work to be done. We are mindful of the profound challenges the American embargo of Cuba has inflicted on the Cuban people and we call on the U.S. government to end this inhumane policy immediately. We also know that the same forces that have kept our relationship with Cuba in a deep freeze for five decades will do everything in their power to scuttle this emerging agreement. Now is the time for people of good will to stand up. Sign the Global Exchange petition to end the travel ban.

There is much common ground on which the people of our two countries can find spaces for partnership—from immigration and the environment to the fight against Ebola and the violence unleashed by the drug war in Latin America. Partnership and mutual respect should and must be the guideposts for the United States and Cuba as we embark on a new era in our relationship.