Guns and Violence are a Public Health Issue 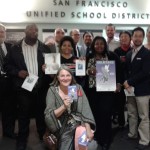 One by one the 8th graders from Buena Vista- Horace Mann School got up to speak at the podium in front of the San Francisco school board to tell about their grief and fear after the death of one of their friends. They said,

Violence affects our education, we can’t focus; it affects our mental health because we are afraid at school and on the streets and that’s why we are here to urge you to vote for the resolution in ‘Support of the Prevention of Gun Violence’. 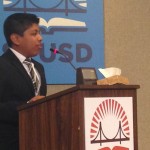 The 13 and 14 year old’s input was the latest bit of organizing to come out of work  started at Global Exchange in the wake of the Newtown shootings when we were inspired by the Caravan for Peace.

With 4 pages of  “Whereas:” language Commissioner Matt Haney laid out the problem as it affects the health of students in schools – Guns are the second leading cause of death among children and teens.  There have been  approximately 87 school shootings since the one at Sandy Hook elementary school in Newtown.  More than 75% of the guns used by youth in suicide or guns causing unintentional injuries were kept in the home of a relative or friend of the victim.

Dr Peter Choi, a pediatrician told the Board that the absence of guns from children’s homes was the most reliable and effective way to prevent fire-arm injuries. 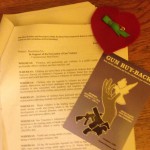 A letter will be going out to all households in December to commemorate the students lost to violence in Sandy Hook and elsewhere with instructions for safe storage of weapons and to encourage parents with guns to participate in the Gun Buy Back program sponsored by the city police department and local anti-violence groups. Health and wellness modules on guns and gun violence will be taught to all middle school and high school students and on December 13th, the teacher’s unions, community groups and victim’s groups will all gather at the UN Plaza to remember those lost to violence.