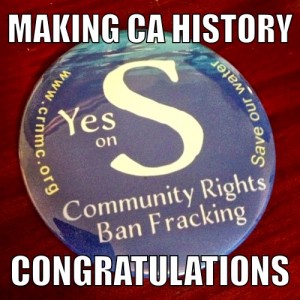 At 8:00 pm on Election Night 2014, residents of picturesque Mendocino County concerned about the availability and quality of local water waited anxiously for the first results on Measure “S”, the Community Bill of Rights Ordinance that bans fracking, dumping of frack waste and protects their water from being used for fracking anywhere in the state. Global Exchange and our partners and allies were proud to support the Community Rights Network of Mendocino County (CRNMC), the group behind this initiative.

Just after midnight it was clear they had made California history, passing Measure S by a whopping 67% of the county vote. It was not the only measure in the state to ban fracking—San Benito, CA voters passed Measure J despite the heavy influx of Big Oil funding to defeat it, while Santa Barbara’s anti-fracking measure succumbed to corporate money influence.

But residents of Mendocino county did far more than ban fracking this election.

With the passage of Measure S, residents in Mendocino County made history as the first California community to adopt a Community Bill of Rights, placing their rights above corporate interests. Residents see enactment of this ordinance as the first step in asserting their right to local self-government, and a rejection of the idea that their community will be a sacrifice zone for corporate profits. This is a huge milestone for the community rights movement in California—joining with over 180 communities across the country who have also changed the structure of law by passing 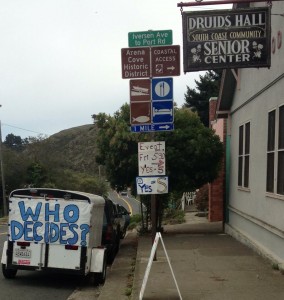 The Mendocino County Community Bill of Rights Fracking and Water Use Initiative, (Measure S) establishes the rights of the people of Mendocino County to a healthy environment, including clean air and water, and the rights of ecosystems to exist and flourish. The measure also secures the rights of residents to local self-governance. Fracking is banned as a violation of those rights, and directly challenges constitutional so-called “rights” of corporations to frack in their County. The extraction or sale of local water for use in fracking anywhere in the state is also banned, along with the dumping of toxic frack waste. Further, the measure bans the transfer of offshore fracking oil or waste through the County.

Jamie Lee, a community-based farmer in the Anderson Valley of Mendocino attended the very first Democracy School, a weekend rights-based training, in California in 2006, hosted by Global Exchange and CELDF. “Who knew back then that we would be celebrating this victory today.”  Over the years Jamie Lee brought Global Exchange’s Shannon Biggs to Mendocino many times to meet with groups and residents, hold public lectures, along with other practicioners and educators of the Community Rights framework, including long time advocate Paul Cienfuegos.

So by the time Peter Norris of Willits reached out to Global Exchange in 2013, there was already a strong sense of community self-governance throughout the far-flung county. A county wide Democracy School was held with 50 people, followed by steady flow of rights-based organizing support from Global Exchange, and the encouragement of the anti-fracking movement of California.   David Braun, part of the coalition Californians Against Fracking was a regular visitor to Mendocino throughout the election cycle, “Starting today, in Mendocino, community rights trump those of big money and corporations, but they also ensure that fracking doesn’t destroy precious and irreplaceable water air soil and biodiversity.  Big congratulations are in order to the people of Mendocino for their hard won battle against big oil.   Now we need to double down and make sure all the people of California and around the country are protected from fracking.  There is a lot to build on for all of us – and we will.” 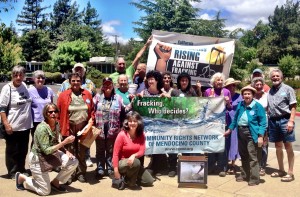 Resident members of CRNMC turning in signatures for the ballot in June, 2014

But it was the community that came together to put this into law. A core group of 30 and countless volunteers worked tirelessly throughout 2014 to collect the signatures for the ballot, host public events, write letters to the editor, paint lawn signs and go door-to-door with the message that decisions about water protection in Mendocino belong to residents and residents alone. As key CRNMC member Kelly Larson said, “Measure S was organized around a network model, rather than the old hierarchical top-down leadership, thereby modeling the ‘community’ in community rights.”

As resident Carrie Durkee proclaimed, “The passage of Measure S looks like a milestone to me. I’m filled with appreciation, admiration, and gratitude to all for the creation of the Community Bill of Rights.”

Kelly Larson added, “Measure S is an important challenge to corporate constitutional rights, and the oil and gas industry.    We’re grateful that the voters of Mendocino County so strongly support community rights…Local people deciding for local control and decision making.  Democracy won here today!” Jamie Lee echoed this, saying, “this is only the beginning of local self-governance for us up here in Mendocino, the first step of many toward changing the rules about ‘who decides’ what happens here. WE do.”