State Behind the Murders of Students from Mexican Teacher College 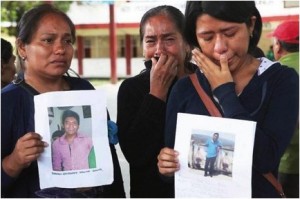 The story about the violent police abduction of 43 students from the Ayotzinapa Rural Teachers College and the subsequent discovery of at least four mass graves with dozens of bodies in Guerrero, Mexico seems to turn worse with every news cycle. The cold pre-meditated nature of the crime is enough to render any of us speechless, but we cannot remain silent.

Condemnation of this atrocious crime of the state has been swift across Mexico and abroad. Meanwhile, Mexico’s Federal government has distanced itself from the crime and has sought to downplay army involvement.

One person who does not believe in the government’s innocence Diego Osorno, a reporter who just two weeks ago won a “Premio Nacional de Periodismo”, Mexico’s top prize for journalism.

Diego drove me from Monterrey to Saltillo last summer and told me during the ride that President Enrique Peña Nieto’s aggressive agenda to frack, mine, deforest, and otherwise despoil and dehumanize Mexico will inspire great resistance and require what he called a hundred Atencos to accomplish.

Atenco, of course, is the site of the notorious 2006 police massacre, repression, and mass sexual abuse perpetrated in the state of Mexico under the direction of then Governor, Enrique Peña Nieto.

Mexican Attorney General, Jesus Murillo says the motives behind the Ayotzinapa massacre are unclear. Diego Osorno disagrees and wrote a blog that I have translated here in full.

It is the best explanation I have seen. The Spanish version has already been shared on Facebook more than 32,000 times.

The Causes of the Iguala Massacre

“Finally Order is Restored,” blares the eight-column headline of the Diario de Guerrero on the day 43 students of the Rural teachers college of Ayotzinapa, Guerrero disappear. The story summary says: “The action of the State and Military Forces (sic) to prevent vandals from stealing busses in Ayotzinapa is applauded by the public.” A week later, a dozen bodies unearthed from a series of mass graves in Iguala are analyzed by forensic experts with the terrible prospect of some being the young people between 16 and 20 year old who are officially missing. Up to press time no official confirmation.

[There is now confirmation of four mass graves and at least 28 bodies believed to be murdered students.]

What we do know is that the Federal government has long tried to disappear this Rural Teachers College founded by President Lázaro Cárdenas del Río [in the 1930s], calling it unproductive and contentious. 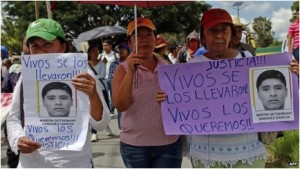 In 2013, the education reform initiative proposed by President Enrique Peña Nieto targeted the school in Ayotzinapa for elimination and had support from all political parties. And it would have passed, if not for the [occupy style] protest actions carried out in the Mexico City by teachers of the dissident CNTE, the vast majority of them from Oaxaca.

But the powers that be have not limited themselves to legal methods to make Ayotzinapa disappear. Since the administration of Salinas de Gortari [1988-1994] to current president, Peña Nieto, Ayotzinapa has come under attack by paramilitary groups that operate in Guerrero with the protection of the army.

The students and their school have been portrayed as criminals with the help of newspapers who sell their editorial judgment to the highest bidder.

I’ve gone to Ayotzinapa several times to interview students. From my long conversations with several of them, I know why there is such rage against them: the students are young, of humble origins, and very studious.

On average they read two or three books a week, in addition to their assigned class work. They also take interest in the social and political problems in their surroundings. That is to say that they are informed and critical students who also tend to be idealistic and put their ideas into action and change things.

Yes, Ayotzinapa is a school for organizers of social struggle and the current regime has no democratic way to confront those who use a stronghold of citizen power to participate in bettering their society. Those who hold power in Mexico despise idealism and are looking to put an end to it. 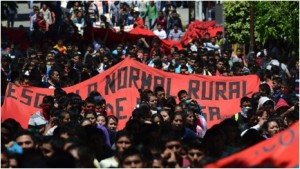 The slaughter of Iguala was not caused by an American football game [as some officials suggested]. That version is another of those insults to our intelligence with which the powerful create their absurd narrative.

We know the Mexican state is the causes and has the responsibility for the disappearance of these young people. The state has long encouraged and allowed the Army to operate outside the law against those involved in social struggle in Guerrero and elsewhere. The Army, coordinates with police forces, who in turn work with narcos, creating a genuinely criminal force.

Alongside the lead story in the Diario de Guerrero that criminalized the students of Ayotzinapa there is another with the headline: “[Governor] Ángel Aguirre delivers technology and school equipment in Acapulco.”

What the Governor needs to deliver now and quickly is his letter of resignation due to the irresponsible way he sought to “bring order” in Guerrero. 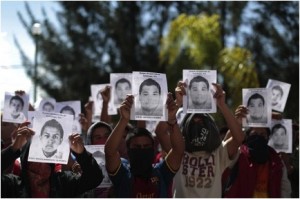