A Haiti Delegate Shares Her Experience

Many of my friends and colleagues have expressed an interest in what I found in Haiti. Even the clerk at my dentist’s office wanted to hear about my trip. I visited Haiti June 7-14, 2014 on a fact-finding trip. I certainly did not know what to expect, even though I have studied many facets of life in Haiti, pre and post-earthquake. Real life can be quite different.

In fact, I participated in a Global Exchange Reality Tour, designed to expose travelers to how people actually live in conditions other than what we, as Americans, know as the norm. These are some of my impressions of Haitians and their country, the first of what I expect to be several visits. 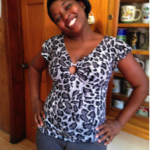 Haitian people know how to pose for a camera- the instantaneous poses were literally picture perfect, and it didn’t matter if the person was a kindergarten student or a middle-aged adult, male or female. It was in the tilt of the head, the hands placed just so on the hips, the look in the eyes, the flash of the teeth, and the bent of the body. There was a joy in the pose, which added to the fun I experienced in taking the photos.

Of course, not everyone wanted to be photographed. Many Haitian people are now distrustful of foreigners requesting photos or videos. As was explained to us on the tour, Haitian people are disenchanted with unrealized expectations of these pictures being used to help them in some way, to tell their story. They understand that photos and interviews granted usually profit others, not themselves. Consequently, many refuse to have their photos taken, as a resistance to exploitation.

An example of that would be when we visited ACRA, one of the remaining post-earthquake camps. After listening to the camp host’s presentation, we walked through the facility. We passed tent stores for goods and adult and children residents along the way. I remember some people staring at us, some people turning away with a short chuckle. I don’t recall if it was I or another person who asked a woman to photograph her but I do remember the look of disdain she shot at us, turning and walking away. I don’t blame her. Given the same situation, I would have probably done the same thing. 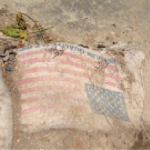 While at ACRA, I photographed tops and sides of tents with the United States Agency for International Development (USAID) insignia stamped on the fabric. It made me feel somehow complicit in the day-to-day life in these camps, as my tax dollars are somehow mixed in with these flimsy dwellings.

Haitians are excellent drivers. First of all, there are some paved roads- however we, in the mighty van, did not much travel on such roads. Most of our travel was on rocky, I mean BIG ROCKS, roads. There were tiny streets, alleyways really, that I did not believe the van would turn down- and yet, there we were, going down what I thought was this improbable lane to an appointed location.

Okay. Here’s the thing. There are no stop signs, no stoplights, and no lines down the middle of the streets, to speak of. Yet, drivers make their way through to their destinations. We did. There is a lot of traffic in Petionville, Port-au-Prince, and in developments, like suburbs outside of town. Rue Delmas 33 is a long, winding thoroughfare filled with people selling produce and wares on the streets, and in seemingly tin storefront businesse 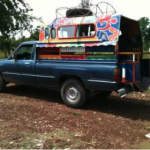 I saw groups of motorcycles on the side of the road, some with guys sitting on them. I couldn’t figure out why there were these enclaves, at regular intervals. Turns out the guys were waiting for passengers, as the motos are used as taxis. Tap-taps (pickup trucks with a cab on back), outfitted with slats for seating on either side, are used as public transportation, much like buses here in San Francisco.

And then, of course, there are the people in the streets. The women, many in African garb, carry baskets of food and other things on their heads. In my journal I wrote, “There are vendors on the street everywhere, selling big bunches of bananas; a woman carrying a big, butternut squash-looking light green melon on her head.”

I mean, it is quite a sight when you look down Delmas 33.

Through this kaleidoscopic scene, our van literally rocked and rolled down the path. What was extraordinary to me is that, in Haiti, driving is a sport of skill and calm nerves. For instance, I cannot tell you how many times we would come to an impasse where our van met with a truck going in the opposite direction, with seemingly no space to pass. The vehicles were a couple of inches apart! I sat there waiting for one of the drivers to begin an argument, maybe come to blows. Never happened. Time after time, the drivers would assess the situation, in silence, with their arms resting easily out the windows.

Looking at each other, one of them would flick a single finger. One of the vehicles would move in a space that I never saw, and the other would successfully pass, continuing on to the destination. What is that?! I do not know how this works, but it does. No one says a word! There are no frayed nerves, no rude gestures. There are smiles and silent camaraderie. I find this just amazing, as road rage here in the US is rampant, and until I began meditating recently, I was a participant in the ‘what’s wrong with you?’ brigade.

Haitians make great beer and rum. Let me say, if you are an ale, or beer drinker, find a way to get Prestige beer in your supermarket. OMG! This is beer – light in color, a lager. I am not a fan of lager. But I am a huge fan of Prestige beer. Our entire group was too. Every night at dinner we each had two bottles of that beautiful liquor. Once I returned to San Francisco the first thing I did was Google it, because I needed it with dinner. According to Wikipedia, Prestige is the only beer produced in Haiti (1976) and began exports to Canada and the US in 2005. It has won the World Beer Cup in 2000 and 2012. Unfortunately, it’s not to be found in San Francisco. I must go back to Haiti.

Now, if you drink rum, which I did not until I brought a small bottle home, try Rhum Barbancourt, produced in Haiti. It can be sipped like cognac. Delicious, well respected in the industry, and is found at BevMo.

Haitian food usually consists of rice and beans, chicken, goat, or fish, and piklize, a domestic take on kimchee. Here is a look at my first dinner at a Haitian restaurant. Delicious! 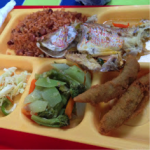 My experiences in Haiti were rich and varied. The people were very nice to us, I think in large part because of our guide, Madam Rea Dol. It feels strange calling her that, because she is so much more than a guide – an educator, a community organizer with a viable multi-faceted organization, a wife, and a mother of three.

The focus of my work is to reframe how the everyday person in the United States thinks of what Haiti is, and who the everyday Haitian people are. I believe that both have a negative connotation. But, as Madame Rea says: “…we are great people. The way they’re talking about Haiti; the way they present Haiti, the way they tell Haitian people, not a good people…I say it’s not true.” She wants people to understand that, “Haitians know what they want.” They have goals. “We know what to do, but sometimes they don’t let you do it. The people have, the big power people, just press Haitians, and they don’t want you to move.”

Sometimes, even when you are in some way involved in this work of getting people’s true voice into the general public realm, you can become part of the promulgated misconception. On the first full day of the tour, Madam Rea took the group up to one of the highest points in the mountains, overlooking much of Haiti. We stopped at what I would characterize as a tourist trap. We were right at the edge of the mountain. There was a lively restaurant filled with visitors, and an animated craft concession theme. Paintings were leaning against the retaining walls on both sides of the narrow paved road. Before I arrived in Haiti, I had been thinking of purchasing a painting that reflected Haitian people enjoying the beach. That’s not something we see here in the States. The atmosphere for the vendors and potential buyers in a market like this is intense, even frantic. It can be fun. But artists are trying to make a living, so if you walk along the lined-up paintings the artist or the artist’s representative will approach you for a sale.

I found what I thought was a beach scene, but I was not too enamored with the style of painting. Also, there was something odd about it; I did not know what. It was too large to carry on the plane; the artist did not have a smaller version. I left it and returned to the van, as it was time to go. The artist followed me to the van, bringing down the price. To accommodate my lack of luggage space he removed the painting from the frame and backing, rolled it up for me, and I carried it back here to San Francisco. 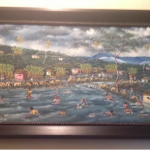 My son, Yves-Langston, had the painting framed, and when I returned from a July road trip there the beach scene was, beautifully ensconced in black. However, when I looked at it on my living room floor something leapt out at me. The depiction was not of a beach, but of a hurricane and the resultant flooding. The people in the water were in street clothing; a man is carrying a child on his back; a woman is holding a sack above the water; buildings are filling with water; the sky is cloud-filled, and rain is falling. This is a scene of people trying to get to higher ground, in a dire circumstance – not frolicking at the beach.

Like many people who want to “help” or “do well by another”, initially I saw what I wanted to see – a beach scene. I knew something was odd. What was really odd was my preconceived notion of what was in that painting. The artist was telling a story that I was not expecting. It was right in front of my eyes, yet I did not see.

My job is to present an alternative picture of the ordinary, everyday Haitian person – to tell their stories through their own words, paintings, music, science, and so many other accomplishments. To be successful, I have to constantly check my assumptions, and my position in society, to be able to more clearly hear, see, and experience the reality of the Haitian people. Otherwise, I am just as culpable as those who exploit them for their own aggrandizement.

Next year, I plan to return to Haiti, to learn Kreyol, and converse with people in their language. My first formal conversation will be with Eddy Azor, the artist who created the hurricane painting.

These are a few of my initial impressions of the Haitian people that I garnered on this first trip to Haiti. My hope is that you can read this essay and reflect on your assumptions and perceptions of the Haitian people, as well as your position in society. Then we can begin the conversation that so many have requested of me about whom we are or aspire to be in light of racial and cultural differences.