It’s time we all got on board with a people-powered climate plan.

The final destination on this journey is to join the largest-ever climate march in New York City on September 21 & 22, coinciding with the United Nations Climate Summit taking place there, which will serve as a public platform for world leaders, big business and some participation from civil society. The stated goal of the summit is “to catalyze ambitious action on the ground to reduce emissions and strengthen climate resilience and mobilize political will for an ambitious global agreement by 2015 that limits the world to a less than 2-degree Celsius rise in global temperature.” 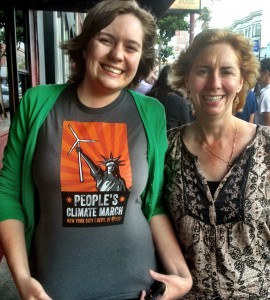 Kylie Nealis of the Sierra Club and Suzanne York of the Institute for Population Studies will be in New York.

For many, faith in the UN as a global forum for solving the climate crisis has all but been shattered.  Critiques range from calling out the UN as a flaccid institution to the more cynical view that it has been co-opted, branded and sponsored by corporations.  Yet there are other reasons to show up in New York while leaders gather.

As David Turnbull, Campaigns Director for Oil Change International says, “World leaders have come together too many times with nothing more than strong rhetoric and empty promises in tow. Science is simply screaming at us that we must not delay action any longer, so the time is now to show our strength as a movement. I can’t wait to join the hundreds of thousands of real leaders marching on the streets of New York demanding action and to show our elected representatives that their empty promises will no longer be accepted.”

Others are going to highlight particular issues. An entire contingent of affected residents, activists and concerned Americans are going to connect the dots between fracking, other fossil fuel exploitation, and climate disruption.  350.org’s Fracking Campaigner Linda Capato says, “I’m going to PCM because we need to make it clear to decision makers that if we are serious about climate it needs to be a future without fracking.” 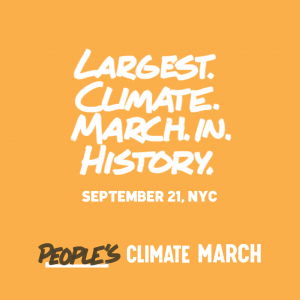 Global Exchange will be in New York not to beg officials to act, but to stand for communities  are already on the leading edge of climate solutions, from banning fracking in their communities, to boldly placing the rights of residents and ecosystems above the array of harmful corporate projects that collectively emit the bulk of carbon stored in the atmosphere.  The march is going to be big—really big, and there is value in connecting with people from all across the country in this way, sharing stories, networking and finding ways to come together to reinvent our future without dependence on fossil fuels.

Those of us working on the rights-of-nature framework are seeking to reconnect humanity with the rest of species. We seek to change human law that can only “see” nature as a thing — separate and apart from us, property to be owned and destroyed at will. We seek to change the law because our own salvation can only come from a cultural mindset enforced by an earth jurisprudence that we are a part of nature. In New York we will join allies including Osprey Orielle Lake,  Executive Director of WECAN in presenting these ideas at a special panel: Rights of Nature and Systemic Change in Climate Solutions, on September 23.   This event is free and open to the public however, due to its proximity to the global leaders, collected security in this part of the city is tight so registration is required. Once you register (which takes less than 30 seconds), you will receive an invitation that you will need to have in hand along with ID to attend the event. As Osprey says, “Nature will not wait while politicians debate. It is time for ambitious action that addresses the roots of the climate crisis and fosters justice for the Earth and future generations.”

For the variety of reasons people are coming to join the march, the reasons people are getting there via the climate trains (and buses) are the same — to connect with each other and build the nationwide movement for change in the only way that matters —by building people-to-people ties. I will be riding with people like Pennie Opal Plant from Idle No More Bay Area who says, ” I’m excited to meet activists working to ensure life as we know it continues on the belly of Mother Earth.”  Sierra Club’s Kylie Nealis will be leading another train from DC to New York and says, “I’m joining the climate train because I believe its important to not just voice what we’re against but to also collectively advocate for solutions to climate change like clean energy and nature’s rights. The train will be a space for people to come together and connect around those solutions!”

I will be joining the train in the Bay Area, and meeting 170 fellow riders, sharing stories and strategies for change. I will be leading workshops on community rights, rights of nature and fracking, and learning from others as we come together from across the country to share knowledge and collaborate while enjoying a beautiful ride through breathtaking wilderness areas.

The first train is sold out—but don’t worry, they have already started another one to meet the demand—so there is still time to climb aboard. Visit People’s Climate Train to SIGN UP NOW! For anyone who still needs lodging in the Big Apple secure them now if you haven’t already and there is a free option!  The PCM Faith Team has generously offered to match you up with available space in churches or homes. Contact  Jennifer Kim at the Center for Biological Diversity.