Part of the intern experience at Global Exchange involves a short exposure to each department’s work and world. As the Reality Tours intern, experiencing a mini Reality Tour around San Francisco’s historic Mission District gave me not only better insight to the work that my team prepares for but also a greater awareness and appreciation of the history, culture, and life that this neighborhood offers. 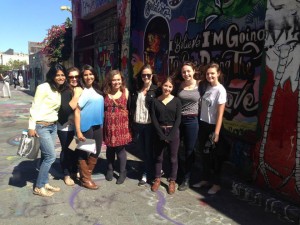 The summer interns in Clarion Alley

We started with a brief introduction to Mission Local, a news outlet that covers the neighborhood in a fair and thorough way by Mission residents. Andrea Valencia, a translator and reporter for the site, gave us some background on Mission Local and its aim to foster a stronger community and become a self-sustaining business. She handed us copies of their most recent newspaper edition and I was intrigued by the amount of information and art inside the pages.

Afterwards, we walked over to the Redstone Building, formerly known as the San Francisco Labor Temple, and received a short presentation on the history of building. Roger Herriod told us about the changes the building has gone through, first being the Labor Temple, a home for all unions and workers in the 1930s, then being renamed the Redstone, as unions became stronger and built their own halls in the 50s. I couldn’t help but be intrigued by all the action this building had seen. From the General Strike of 1934, a four day strike that inspired laborers all throughout the country, to its expansion in 1939, to the building’s change in name to the Redstone in 1968, and its struggle to preserve the building in the 90s, the Redstone Building truly is a San Francisco landmark. The building now stands as a home for non-profits, artists, and other low-income tenants. Although the Redstone is now completely different from its beginning, the history of the place is felt through the posters of labor unions and past political movements that decorate its walls. 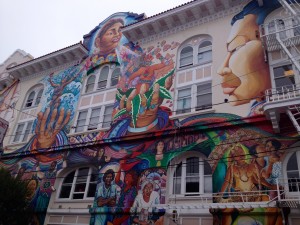 Following this presentation, we took a look at the art surrounding the district including the murals in Clarion Alley and the Women’s Building. Walking through the alley, one can really see the diversity and energy that exists in the Mission. From political statements to abstract images to spiritual pieces, the alley serves as an outlet for local artists to expose their creativity. The murals decorating the Women’s Building also offer inspiring images of strong females including daughters, mothers, leaders, saints, and goddesses, all interwoven within one another. Without a doubt, getting a glance at the Mission’s art was my favorite part of the tour. I was amazed at how all the political and social consciousness the district carries can be expressed so well through such beautiful and interesting art.

We then made our way to Mission High School, where Jay, a current employee, gave us a tour of the school and an overview of the school’s Green Pathway, the school’s attempt to integrate environmentalism in its curriculum. As we walked through the halls he talked about the Memorial Garden, which was designed and developed by the students, and how it serves as learning ground for key principles of organic farming. We also saw the homemade greenhouse that stands by the field, which gives students the opportunity to learn about plant propagation. Though Jay’s enthusiasm was present throughout his overview of the school’s environmentalism, nothing animated him more than when he talked about the student body. With students coming from all over the bay and even other countries, Mission High truly offers a diverse set of ideas and perspectives.

As we made our way back to the office, Drea, a Reality Tours staff member, filled us in on some San Francisco trivia about Dolores park and Mission Dolores. I couldn’t believe the amount of history and life the Mission District offers, even though I had walked through these streets all summer. Getting a chance to learn about a historic landmark, see all the art and culture surrounding the Global Exchange office, and be exposed to Mission High’s environmental curriculum and diverse student body gave me a whole new appreciation for this neighborhood. With the amount of resources, culture, and history this neighborhood has to offer the Mission District really is a city within a city.