The following is part of a multi-part series examining the preparations and aftermaths of the 2014 World Cup and 2016 Olympics in Brazil. Read the entire “Re-think the World Cup” series. 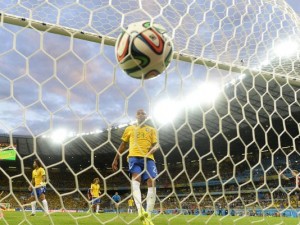 The score last night didn’t seem right, but in another sense it did. We know that for every action there is an opposite and equal reaction. When the means to any end are abhorrently unjust, often times so too is the end. The matches of the World Cup seem to be no exception to this law of the universe. It was only fitting that the score was so lopsided and the outcome so appallingly unjust: it was the competitive equivalent to what Brazil and its people have suffered to host the event.

There were two blowouts this World Cup. One took place last night during Brazil’s historic loss. The score: 7 to 1, Germany over Brazil. The other has been taking place over the course of the past few years. The score: $4 billion to $-14 billion, FIFA over Brazil’s people.

In reality, Germany’s blowout victory was nothing compared to FIFA’s blowout victory – an outcome that was decided before the first match of the Cup even began. The immorality and injustice of this World Cup came to be painfully reflected in a 7-1 loss that left Brazilians sobbing in the stands of a multi-million dollar stadium, financed by taxpayer money in a country badly needing taxpayer money to be spent on schools and hospitals. TV cameras focused on tearful Brazilians wearing yellow jerseys in the stands, but very few have focused on the many more who have been sobbing over the destruction of their homes to build those stadiums.

In a way, it was only fitting that things played out as they did. It was only fitting that Brazil first lost its team captain to yellow cards, then its best player to injury, and then suffered a massive, tragic, and historical loss in front of its home crowd – it’s first international loss in 39 years on home turf, and the worst loss by a host nation in World Cup history – all only one win away from the championship match at the legendary Maracanã stadium in Rio de Janeiro, a potential opportunity to avenge a previous heartbreaking World Cup defeat in the 1950 final at the hands of Uruguay in the very same stadium.

It doesn’t feel right. But then again, neither does FIFA taking home 4 billion dollars while Brazilians levy 14 billion dollars to host the event in the face of widespread poverty and inequality. It was only tragically fitting that Brazil saw its team get demolished: it was what 250,000 Brazilians – mostly poor – have watched happen to their homes.

That it’s “fitting” doesn’t make it right – what we may have just witnessed last night was a cumulation of negative energy that has surrounded the event from the very first announcement that Brazil would host it. The decisive game between Brazil and Germany was only a fitting, albeit painful, reflection of that reality.

FIFA and corrupt politicians in the Brazilian government could have only been hoping all along that Brazil would win it all and temporarily cover up a nation’s sentiment towards corruption, misspending, and misgovernance that brought millions of people to the streets last year. That hope was dashed last night in seven German jabs to the back of the net.

In a strange way, although painful and bewilderingly unjust for Brazilian fans, this loss may end up working in Brazil’s long-term favor. With the opiate of soccer and victories gone, Brazilians will somberly turn back to a sobering reality. Like a drug user off their high, the country will collectively return to a reality that the drug of soccer had temporarily covered up. Many Brazilians have needed no such assistance, but losing in this manner certainly facilitates it.

FIFA can only wish it had rigged this game just as it had rigged the bid to the 2022 Qatar World Cup bid, which is now being built on the backs of slave labor. Corrupt Brazilian politicians can only hope they make it past the next election.

Revolutions can happen this way. Corrupt actors within Brazilian government should shudder. So should the dictators of FIFA.

“There are visible and invisible dictators. The power structure of world football is monarchical. It’s the most secret kingdom in the world.” – Eduardo Galeano