FIFA: Return the Beauty to “The Beautiful Game”

The following is the third installment of a multi-part series examining the preparations and aftermaths of the 2014 World Cup and 2016 Olympics in Brazil. Read the entire “Re-think the World Cup” series.

So who wins the World Cup? While it may seem that decision is still getting played out in stadiums across Brazil, FIFA president Sepp Blatter is surely laughing from his luxury suite.

The winner had already been decided well before the first match even began. FIFA’s 4 billion dollars in untaxed revenue from the event is the trophy.

It appears to be of little interest to Mr. Blatter or other FIFA execs that this trophy has come on the backs of 200,000 low-income people being forcefully evicted from their homes to make room for the event, 8 construction workers dying in the frenzied rush to erect stadiums on time, or 14 billion dollars of Brazilian taxpayer money being spent on the tournament in the face of poverty, inequality, and widespread social issues within Brazil.

For those who don’t know, FIFA – the Fédération Internationale de Football Association – is the world governing body for international soccer. Based in Zurich, Switzerland, the organization began in Paris in 1904 under the simple mission of creating and regulating rules for a burgeoning new international sport.

While the origins sound humble, it is now anything but that. FIFA has since developed into an extremely lucrative, secretive, and immensely influential organization that brings in billions of dollars and holds the power to override national governments.

FIFA has a notorious past, mired with corruption and scandals. If there were still people out there unaware of what FIFA is all about, John Oliver took care of that last week.

The corruption of FIFA itself is well-documented. If FIFA were a country, it would likely rank near the bottom of the transparency index in world corruption rankings. The hidden profit making and back alley deals of its executives are a punch to the gut to any person mistaking them as a benevolent sports organization. And in the face of Brazil’s poverty, no less, it is duly repugnant. 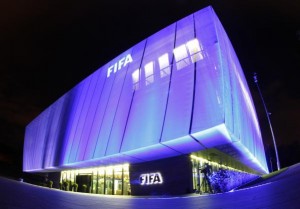 FIFA’s claim to be a non-profit organization, while taking shelter in its swanky, state-of-the-art headquarters building in Zurich, is offensive to those with rational minds. Its executive committee conference room harkens to mental images conjured from a Tom Clancy spy thriller.

It is in this imperial conference room that FIFA execs draft their absurdly dictatorial demands on World Cup host countries. One such demand: the right for FIFA and its corporate sponsors to override existing local tax laws in host countries for near total tax exemption, which allow them to directly profit off the communities and countries they go into and yet give nothing back to them in tax liability. 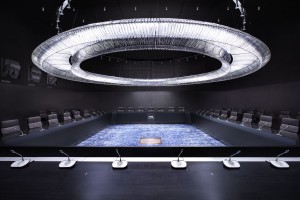 Another demand: the securement of 2 km “special zones” around all World Cup venues that only allow FIFA and its sponsors the exclusive right to sell products and services, essentially casting aside small local vendors and businesses that have made a living around local sporting events for years.

FIFA has also trademarked nearly 200 words and phrases for the 2014 World Cup for its exclusive commercial use, and any business that uses such words and phrases can face legal action. While “Brasil 2014” may be an obvious one, something like “Natal 2014” can be more problematic: Natal is a 2014 World Cup host city, but “Natal” also means “Christmas” in Portuguese – which could pose a dilemma for any local shop owner who wants to advertise for the holidays this year.

Through all these demands and revenues, FIFA has no accountability, no transparency, and no third party oversight whatsoever. Its executive committee is a small circle of secretive elites, almost exclusively men, who get to dictate the economic rules of the world’s most popular sport from a sleek mountaintop perch, void of any direct oversight or supervision for decisions and actions that affect millions of people around the globe.

One only needs to read today’s papers to find the most recent scandal: it has surfaced that Qatar – the chosen host of the 2022 World Cup – allegedly paid off FIFA officials with millions of dollars worth in bribes to secure the World Cup bid.

Ironically, but not surprisingly, the man who led Qatar’s bid and who is at the center of allegations, Mohamed bin Hammam, is a former FIFA executive committee member himself. He was banned from soccer after bribing officials in 2011 to replace Sepp Blatter as FIFA president.

Not only does it seem FIFA awarded Qatar the bid due to lucrative bribes, but it also chose Qatar despite the fact that the country is virtually a slave labor state – no small deal when the country has to build massive new stadiums and infrastructure much like Brazil has been doing. Hundreds of migrant workers have already died and thousands more have endured abuse in construction projects related to the 2022 World Cup.

According to a Guardian investigation:

(Last) summer Nepalese workers died at a rate of almost one a day in Qatar…The investigation found evidence to suggest that thousands of Nepalese, who make up the single largest group of laborers in Qatar, face exploitation and abuses that amount to modern-day slavery, as defined by the International Labour Organisation, during a building binge paving the way for 2022.

According to Aidan McQuade, director of Anti-Slavery International: “The evidence uncovered by the Guardian is clear proof of the use of systematic forced labor in Qatar. In fact, these working conditions and the astonishing number of deaths of vulnerable workers go beyond forced labor to the slavery of old where human beings were treated as objects. There is no longer a risk that the World Cup might be built on forced labor. It is already happening.”

And if we thought the 2014 World Cup in Brazil was expensive, the tab pales in comparison to upwards of 100 billion dollars projected to be spent in Qatar for World Cup infrastructure such as stadiums, roads, rail and hotels.

If all that weren’t enough to call out FIFA on its abhorrent choice to award Qatar the 2022 World Cup hosting rights, the weather speaks for itself: summer temperatures in Qatar can reach 120 degrees Fahrenheit – hardly a pleasant, nor mortally safe, environment to play 90 minute matches of intense soccer.

Pending the outcome of the investigation, Qatar may be stripped of its World Cup hosting rights – along with any semblance of legitimacy and dignity that FIFA was still clinging to. Meanwhile, even some of FIFA’s primary corporate sponsors are speaking out against the continued corruption of FIFA, while demanding a further investigation into the most recent allegations.

Brazilians love soccer, as do millions of people around the world. But FIFA needs comprehensive institutional reform in order to make the “the beautiful game” beautiful again. FIFA should no longer be able to singlehandedly sully a game that so many love and adore.

Most of the reforms needed center around transparency and accountability. As it currently stands, FIFA essentially has zero of those qualities. It has no external oversight, only an internal “ethics committee”. But as Dave Zirin correctly points out: “The fact that one governing body is currently in charge of both the cash register and making sure no one is robbing the store is a recipe for graft.”

FIFA urgently needs separate oversight of all of its activity, particularly its financials and the World Cup host selection process. There may even be logic in the idea of a second, completely separate organizational body for international soccer as a whole. As Zirin suggests: “International soccer desperately needs two entirely distinct bodies. One would be in charge of monitoring and actually stopping corruption, bribery and match-fixing. The other could be in charge, in the words of (former FIFA president) Mr. Havelange, of selling ‘a product called football.’”

Some of the reforms needed:

Soccer is not the problem, but the way we have gone about carrying out the pinnacle of its competition is. The ability to love sport and appreciate its highest level of competition can go hand in hand with protesting the injustices inherent to its modern reality. As this World Cup continues, it does seem possible to be able to simultaneously cheer for our teams and appreciate the beauty of sport being played out at its highest level while also protesting and opposing the exploitation that its business side has brought upon us.

The exact origin of soccer’s nickname “The Beautiful Game” is disputed, often times credited to the legendary Brazilian footballer Pelé, while other times claimed by soccer commentator Stuart Hall. But regardless of who first coined it, the nickname stuck, and soccer – or football, as everyone outside the U.S. calls it – is and forever will be known as “The Beautiful Game”.

Sport at its highest level is beautiful. The tears of joy and defeat on the faces of athletes are beautiful. Football is “The Beautiful Game”. But the corruption of its business has polluted that inherent beauty. With these changes, perhaps we can get a little closer to making “the beautiful game” beautiful again.