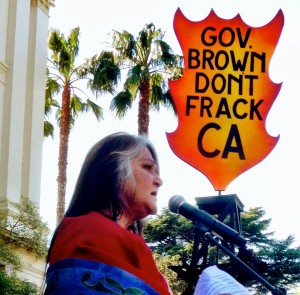 Idle No More Bay Area’s Pennie Opal Plant speaking to crowds of over 5,000 at California’s largest ever environmental rally in 2014.

With the arrival of fracking on the political scene, California’s democracy is unquestionably drowning in Big Oil. As Common Cause has reported, over the last 15 years, $267 million has been spent on lobbying and political contributions in Sacramento, the lion’s share of which coincides with fracking’s ugly rise as the short-term future of the fossil fuel industry. Fracking is perhaps the worst energy idea to hit California’s communities and the climate in history, yet the echoes of “drill baby drill” seem to be resounding throughout the Capitol, overwhelming the voices of the people, common sense, the process of democracy, and the realities of the worst drought in history. As Americans Against Fracking’s David Braun says, “Only in a world where corporate influence rules public policy would slash and burn technologies like fracking—which utilizes enormous quantities of fresh water and toxic chemicals to smash bedrock and release dirty energy—be considered a good idea.” 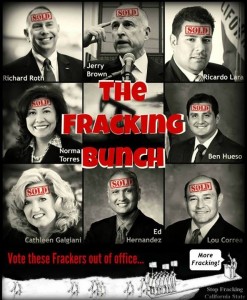 Studies following the recently defeated fracking moratorium showthat State Senators who voted “NO” received 14 times more in industry contributions, coupled with massive industry lobbying expenditures, revealing money’s influence on politics. With huge campaign contributions to the Governor and state politicians; the intense pressure of lobbying; industry’s role in writing regulatory laws; the revolving door of government-to-industry-and-back jobs; and the inappropriate appointments of industry to myriad ‘watchdog’ posts—the crisis we face may be bigger than fracking. Increasingly, California communities are taking democracy into their own hands and banning fracking locally.

Following the fracking money: In the flash of a gas flare, Governor Brown has shaken the “moonbeam” moniker that dogged his early career as an idealist and an environmentalist who stood firmly outside of the establishment. Now, wading deep in the pool of political money, the third-term “climate leader” took Big Oil & Gas contributions totaling $2.5 million before signing the now-infamous bill-gone-bad SB4 into law, which instead of regulating fracking (the bill’s initial intent), actually exempts fracking from regulatory oversight, and even forces the state to issue fracking permits for at least the next two years.

Occidental Petroleum, Governor Brown’s biggest energy funder has the largest stake in Calfiornia’s fracking game. As Claire Sandberg reported in Truthout, in an October 2013 investor call, Occidental executives cited “more favorable permitting” as the impetus behind its plan to increase capital expenditures by $500 million next year in California. “Most of this increase will be directed towards unconventional drilling opportunities where we have more than 1 million prospective acres for unconventional resources,” said Occidental president and CEO, Steve Chazen. 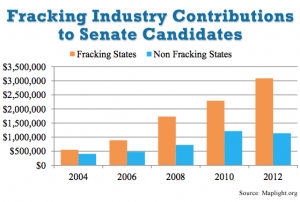 Following the SB4 fail, concerned Californians rallied, continuing to plead and demand that state representatives protect California from fracking by passing a statewide moratorium, a bill known as SB 1132.  In a powerful display of big money over justice, the bill was defeated, a well funded victory for the fracking industry. Following the money, nonprofit watchdog Maplight provided the following analysis: “Senators voting ‘NO’ on the moratorium bill have received 14 times as much money from the oil and gas industry, on average ($24,981), as Senators voting ‘YES’ ($1,772). Twenty-one votes were required for the bill to pass. The final vote was 16-16, with eight Senators abstaining. Three of the abstainers have been suspended from the Senate due to corruption allegations. If the five active Senators who abstained from voting—all Democrats—voted in favor, the moratorium would have passed.

Reported by the Daily Kos: Over their lifetime, the 16 Senators who voted against SB 1132 have taken $590,185 from the oil industry, while the 16 who voted no have taken $159,250. And, according to Truthout, the Western States Petroleum Agency—the biggest corporate lobby in California—spent $4.7 million in 2013, and $1.5 million in the first quarter of 2014, contributing to the estimated $15 million the anti-fracking coalition Californians Against Fracking says the industry spent lobbying against SB 1132.

Regulating fracking isn’t the answer either. With the creation of the Halliburton Loophole, fracking was exempted from the Clean Water Act and the Clean Air Act. But even if it wasn’t—fracking cannot be done safely, and it is largely the industry to be regulated that writes the policies, anyway. As Colorado biologist Shane Davis details, “The Colorado oil and gas conservation commissions (COGCC) regulations are nothing but a public pacifier. There is an internal ‘waiver’ system that allows the fracking industry a free pass to not have to abide by any regulation if they can show the regulation will cause undo financial burden to the operator.” As a scientist who is also living with high levels of Benzene and other toxins in his blood from exposure to fracking sites near his home, he has become a national spokesperson for the cause. Says Davis, “It is very clear the state of Colorado cannot abide by its mission to prevent adverse impacts to the environment and protect public health, safety and welfare.“ 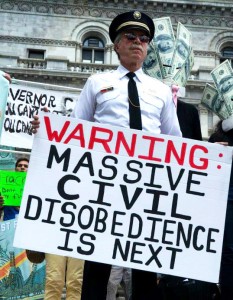 Fracking protests in New York warn Governor Cuomo. Could California be far behind?

So what happens next? For a growing number, the crush of money at the state level is beginning to draw the curtain on the idea that maybe the system isn’t broken but working perfectly—just not for residents or healthy ecosystems. So where do we turn to save ourselves from bad ideas like fracking? Well for now, the growing consensus seems to be that we must rely on our neighbors. A growing number of communities, including Santa Cruz and Beverly Hills, have passed local bans on fracking, with several more working to make it on their local 2014 elections ballot.  Peter Norris, resident of Willits, CA, believes watching the statewide fracking debate play out “only points to the larger issue of democracy and gets to the question ‘who decides about fracking—residents or corporations?” It’s one of the reasons he’s part of  a countywide group, the Community Rights Network of Mendocino County (CRNMC), which is working to pass an ordinance this November to assert their local right to ban fracking: “Residents here feel strongly that decisions about water here should be made locally and should be focused on the rights of community and our ecosystems, and enforced by laws.” 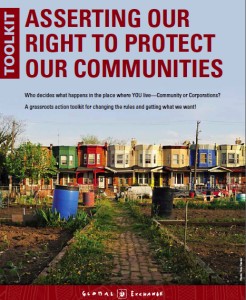 The CRNMC is gathering some 6,000 signatures throughout the county in order to put the idea of community rights on the ballot this November. If passed, Mendocino County will join the ranks of over 160 communities—from big cities to conservative rural townships across the US that have protected the health safety and welfare of residents and local ecosystems by asserting their right to decide what happens where they live. They are working with Global Exchange and the Community Environmental Legal Defense Fund (CELDF) to pass an ordinance that bans fracking by elevating the rights of communities and the local ecosystem above the claimed “rights” of corporations. “I like to think of it in terms of the adage ‘we’re the ones we’ve been waiting for,” says Idle No More Bay Area’s spokesperson Pennie Opal Plant, “We can’t expect our elected officials to act in our best interests. We have to do everything we can to ensure the safety of our communities. Enacting local democracy is an important tool.”