A World Cup for Whom?

The following is the second installment of a multi-part series examining the preparations and aftermaths of the 2014 World Cup and 2016 Olympics in Brazil. Read the entire “Re-think the World Cup” series.

The 2014 World Cup is about far more than sport.

When I talk to people here in the U.S. about the upcoming World Cup in Brazil, most still tend to think of soccer parties and cool World Cup commercials. The lack of awareness as to the realities of the event is startling.

The U.S. media is partially to blame, as comprehensive coverage of the issue has been nearly absent up until very recently. And while sport and parties are certainly aspects to the upcoming World Cup, they are only a part of the story – and to many in Brazil, the least important part. 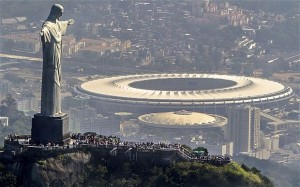 Brazil was booming economy during the first decade of the 21st century. Its GDP growth topped that of most countries in the world, it slashed its rates of poverty and inequality, it saw a significant drop in its legacy of drug-related violence, and it emerged as a growing player on the geopolitical world stage. These factors, combined with Brazil’s famous national passion for the game of futebol, made the country an understandable candidate for host of the 2014 World Cup.

However, some important underlying issues in Brazilian society were overlooked or ignored in the decision to bring the World Cup to Brazil, and which now threaten the very integrity of the event itself.

Among the issues: poverty, a stubborn gap between rich and poor, a deep need for better education, schools, and hospitals, a perverse presence of corruption within all ranks of government, damning environmental realities, and some of the world’s highest rates of violent crime.

Some of these indicators have seen improvements in the last decade, but hardly enough to shrug them off as solved. And despite the country’s firestorm rate of economic growth in the new milennium, this growth has slowed considerably in the last few years.

FIFA was blind to these underlying issues, or at least indifferent to them. And it was certainly of no interest to Brazil’s corruptos, who were quick to jump on the influx of hundreds of millions of investment dollars that would flow into the country for the event – a quick and easy penny in a system ladled with bribery and corruption.

Brazil is slated to spend 14 billion dollars on the World Cup – the most expensive World Cup to date, and far over budget. It’s a staggering figure no matter the place or context – but in the face of Brazil’s widespread social issues, it feels decidedly darker.

But logic has not been at play here. Power, corruption, and the financial interest of a select elite few are.

Perhaps the most potent and visible symbols of this World Cup’s injustices are its stadiums. Several of the new or renovated World Cup stadiums are being dubbed “white elephants” – expensive behemoths that will have little use once the frenzy of the World Cup has passed.

In Brasilia, the nation’s capital, the new stadium has cost $900 million and will hold 70,000 seats despite the fact that the local home team rarely brings in more than a few hundred fans per game and despite the fact that 80% of public schools in Brasilia have inadequate facilities that lack chairs, books, and water-tight roofs. For what? The stadium will host seven World Cup matches.

In the northern Amazonian city of Manaus, the stadium Arena da Amazonia has cost $240 million and is designed to hold 43,000 people despite the fact that the average attendance for local games is only 588 people and the local team that plays there is a fourth level professional team. The stadium will host four World Cup matches.

The price for these stadium projects has not just been monetary: 8 workers have died in the fevered rush to complete stadiums on time for the World Cup, attempting to make up for delays in red tape, bureaucracy, and inefficiency.

The 14 billion dollars spent on the World Cup is a huge sum of money, and the opportunity cost – where the money could have been used elsewhere – can be hard to put into context, especially from a continent away. But when I was living in Brazil for a period of time last year, the reality of this injustice was made very real. 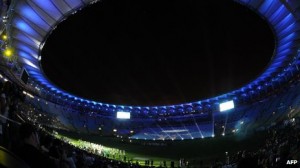 I went to a local soccer match at the Maracanã, Rio’s legendary soccer stadium and home to the championship match of the World Cup. The facility has been completely renovated up to FIFA standards, complete with sleek jumbotrons, sparkling hallways, clean new seats, and a pristine turf pitch. It is certainly fit for the highest levels of competition and a global spotlight.

While perhaps none of this would ordinarily be such a point of contention, when a soccer match ends at Maracanã and you walk out of the stadium you will quickly see why it is indeed just that. The disparity and dichotomy is unavoidable – the injustice, literally, in your face.

As I walked out of the revamped stadium, I looked up and was blighted by a scene of complete disconnect in front of my eyes: hillsides of sprawling favelas right next door – stark reminders of the realities the country still faces, and an instigator of many questions: what could the millions that were used to renovate the stadium I was just sitting in have done for the favelas I was now looking up at?

Favelas are often jointly referred to in Western media as slums or shantytowns, but this is not really an accurate definition – a favela is a favela, a low-income but sustainable model of urban development in its own right. Favelas are home to 12 million people in Brazil; residents often live below or near the poverty line, and can lack access to essential resources such as job training and education, as well as utilities such as sewage and sanitation. Favelas also have a long legacy of violence, both between rival drug gangs and with an abusive, corrupt police force. 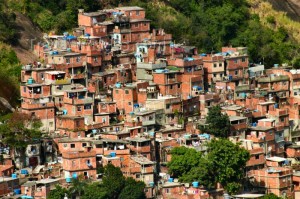 But despite its image problem, favelas have emerged as sustainable models of urban living – organic and natural outcroppings from a legacy of disbandment and marginalization of poor populations, sprung up from squatters on the hillsides of large urban cities in the late 19th century. They have become sources of pride for their inhabitants, and contain an emerging middle class, solid structures, and an increasingly sustainable model of close quarter urban development.

Upwards of 200,000 residents have been forcefully evicted throughout Brazil in order to make room for sports-related projects. Residents are given stark options and little notice ahead of time, forced to uproot from their communities they have lived in for generations. They are given negligent compensation, if any at all. Those who do receive alternative housing are pushed to high rise public housing on the outskirts of major cities, far away from their jobs in the inner city and even further away from the cherished sense of established community they once enjoyed despite their financial hardships.

The state of Rio de Janeiro’s hallmark “pacification” program, designed to both drive out drug cartels from favelas and finally incorporate favelas into city grids, is now being questioned and criticized openly. The program, developed after Brazil won its World Cup bid, has been largely credited with historic lulls in violence in Rio since its inception in 2008. However, recent months have witnessed a marked increase in violence, even in “pacified” favelas close to sport and tourist areas.

Of the hundreds of favelas that exist in Rio, only 37 have been “pacified”. Unsurprisingly, these 37 find themselves conveniently close to tourist areas, wealthy neighborhoods, and sporting venues. While levels of violence have dropped overall, the pacification program has also simply pushed much of the violence farther to the city’s outskirts rather than addressing its root causes. And in the process, heavy-handed police raids that attempt to drive out drug traffickers from favelas and keep sporting areas “safe” continue unabated. The incursions, some made by forces trained by U.S. defense companies, occur with little regard to innocent collateral and the human rights violations committed by police proceed with near total impunity.

Who is the World Cup for? 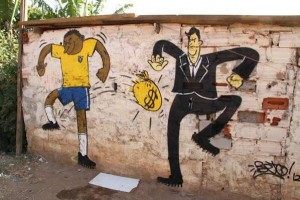 It’s the question many in Brazil have been asking.

The Brazilian people will pay 14 billion dollars out of their own pockets to produce the World Cup while FIFA, a “non-profit” organization, will walk away from Brazil with a projected 4 billion dollar untaxed revenue when the tournament is over.

FIFA and its sponsors will benefit handsomely from the event, as will select developers and certain members of Brazilian government. Sadly, the benefits are not so equally felt.

Despite old claims that mega-sporting events like the World Cup bring long-term economic gains to host countries, recent studies such as those done by sports economist Dennis Coates have shown that this idea is actually false. The games benefit a small circle of people at the top, while the rest of the country experiences no such gains. Meanwhile, the opportunity cost is huge – particularly in a developing country such as Brazil.

The conflict for Brazilians is obvious: they love their futebol, but they also want a better country. They want to celebrate the passion they hold for the sport, but they also want a better future for themselves and their children. The organization of Brazilian civil society in opposition to the World Cup despite their national obsession with soccer is the most telling sign of just how far off this mega-sporting event has become. That 60% of Brazilians feel that the World Cup is bad for the country in a population as soccer-crazed as Brazil is nothing short of remarkable.

We may indeed look back and see that the 2014 World Cup stood on the crux between an old and a new. Like in the Middle East, we are witnessing the rise of a burgeoning civil society in Brazil that is young, tech savvy, and fed up with business as usual. The injustices of the World Cup have forced long-standing social issues in Brazil into the limelight like never before and have instigated a larger social movement that may not fade once the competitions are over. And it us now offering us the chance, as a global community, to re-think and adjust our approach to the ways we go about producing, thinking about, and discussing these mega-sporting events.

The irony would be amusing, if it weren’t so tragic: while corrupt actors initially saw the World Cup as an opportunity to prop themselves up, they may have in fact instigated their own downfall.

Read all entries in the Re-Think the World Cup blog series.