Why Mora County New Mexico is Fighting Frackers for Your Rights, too 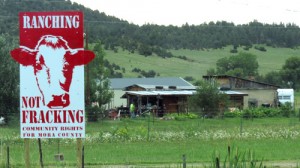 Mora County, New Mexico is not the first place that comes to mind for challenging the ‘rights’ of corporations. This is high desert, and life moves pretty slowly for the 5,000 residents—at least until fracking arrived.

This sparsely populated county is politically conservative, with a large Native American population. Over half of those living in Mora County are native Spanish speakers, and for just about everybody, homesteading, ranching and living close to the land is a way of life. As resident Roger Alcon told the Los Angeles Times, “We’ve lived off the land for five generations.  I don’t want to destroy our water, [and] you can’t drink oil.” 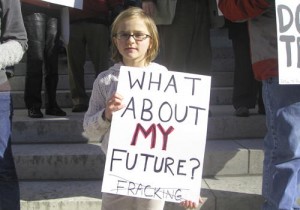 Do we have the right to pollute her future?

In 2013, Mora County became the first county in the U.S to ban hydraulic fracturing by exercising their right to local self-governance. By enacting these rights, they passed a local law—the Community Water Rights and Local Self-Governance ordinance—that bans all fossil-fuel extraction in their county, because to do so would be a violation of residents’ civil rights. The ordinance also strips corporations of their “right” to frack, and recognizes that the ecosystem upon which all life depends has a right to be free of the contamination that fracking brings.

BIG OIL TAKES ON THE PEOPLE OF MORA COUNTY

Shortly after the ordinance was passed, the Independent Petroleum Association of New Mexico and three landowners in a federal district court sued Mora County. They protested that Mora County had violated corporate constitutional rights “commemorated in the 1st, 5th, and 14th amendments,” — the Constitution and a Supreme Court that has “found” that large corporations are rights bearing “persons”—which means as long as they have a permit, unwanted industry can set up shop where we live—even over our community objections.

Then in January of 2014, Shell Western E&P Inc. (SWEPI), a subsidiary of Royal Dutch Shell also sued Mora County claiming that enacting the Community Water Rights and Local Self-Governance ordinance was a violation of the corporation’s Constitutional rights.

Despite what the Supreme Court has said, Mora County residents don’t see the justice in corporate decision makers wielding the law to turn their community into a sacrifice zone for profit.  The Mora County ordinance clearly states “…corporate entities and their directors and managers shall not enjoy special privileges and powers under the law which make community majorities subordinate to them.” 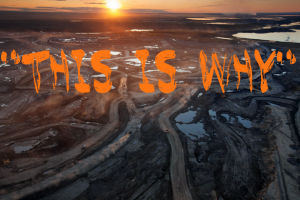 Mora County is not giving in to Big Oil & Gas’ exploitation of welfare, property values, health and the ecosystem all residents depend on. They stand behind the Bill of Rights ordinance which says that, “corporations in violation of the prohibitions enacted by this ordinance, or seeking to engage in activities prohibited by this ordinance, shall not have the rights of ‘persons’ afforded by the United States and New Mexico constitutions…”

With support from the Community Environmental Legal Defense Fund (CELDF), Mora County Commissioners are working to defend this Community Bill of Rights, but even more so to defend themselves from laws that elevate corporate “rights” over community rights. CELDF and the New Mexico Environmental Law Center stand in solidarity with Mora County to exercise their inherent rights of environmental health and safety. Mora County Commissioners are calling on all communities across the U.S to stand in solidarity with the people of Mora county to challenge a structure of law that permits exploitation of  the ecosystems and the poisoning of residents for the profit of corporate frackers.

As said by Ben Price, National Organizing Director of CELDF,

“Why is the outcome of this fight important beyond Mora County? Because at the heart of it is the question: ‘who has rights; people or corporations?’”

The Community Bill Of Rights aims to take back power that people have been stripped of due to corporate greed. People have a right and a duty to protect themselves from corporate elites who desire only to increase profit margins, and in the process, destroy local environments and families.

Nearly 170 communities have passed similar laws that aim to place the rights of residents and ecosystems above corporate interests. In Mendocino County, California, residents have formed the  Community Rights Network of Mendocino County (CRNMC) in partnership with Global Exchange to  pass a similar rights-based ordinance banning fracking.

CRNMC spokesperson Ed Oberweiser believes this is a time for standing in solidarity with residents in Mora County, saying

“Congratulations to Mora County for standing up against an unjust system that says communities don’t have the authority to decide what happens in their community. We here in Mendocino County, California are working to get a community rights ordinance on our November ballot for a vote by we the people. We hope to join Mora County soon with a passed ordinance.”

HOW YOU CAN SUPPORT MORA COUNTY’s STAND FOR RIGHTS

In a recent press release from the intervenors, their civil rights attorney Jeffrey Haas stated,

“This case is about who controls the water, the land, the natural environment in Mora County, the residents of the County who have passed the ordinance to protect their rights and the rights of nature, or an out of State Corporation.” 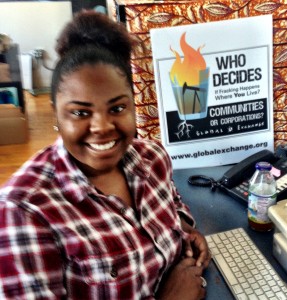 Because a picture says 1,000 words, check out this short video on fracking, and get informed about  Community Rights by downloading Global Exchange’s new toolkit!

Kiara Collins is the Community Rights Program intern at Global Exchange. She aims to create positive change in her local and global community through acute social action and education. She currently attends Sonoma State University where she will be a sophomore this Fall.